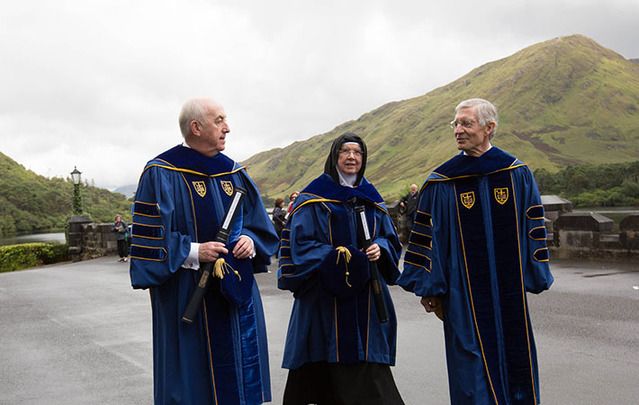 As part of the opening ceremony a blessing and dedication was carried out by Father Timothy Scully, CSC. President of the High Court of Ireland, Justice Peter Kelly and Mother Abbess Máire Hickey were also added to the university’s Roll of Honor at an honorary degree conferral ceremony.

Notre Dame has historically maintained strong links with Ireland. Situated close to the Wild Atlantic Way, Kylemore Abbey is based in Connemara near the west coast of Ireland which boasts spectacular scenery and an abundance of history and culture. The abbey is on a peaceful lakeside setting located among the Connemara mountains in an ideal location that allows for peace, meditation and learning.

The Taoiseach (Prime Minister) Enda Kenny, while unable to attend, sent a video message expressing his admiration for the work of both the University of Notre Dame and the Benedictine Community, the order of Irish nuns who bought the abbey after they were forced to flee Ieper in Belgium during WWI.

During the video the taoiseach said that this new center symbolizes the bonds and shared history between Ireland and the United States. The Taoiseach quoted Irish poet, and recipient of the 1995 Nobel Prize in Literature, Séamus Heaney, who once said, “I have begun to think of life as a series of ripples widening out from the original center.” Kenny added, “Both the University of Notre Dame and Kylemore Abbey are sending out ripples far and wide, drawing people to a shared center – a place of solemnity which fosters a vibrant educational, intellectual and spiritual atmosphere – a true center of excellence.”

Speaking after the ceremony Provost Tom Burish said: “The University of Notre Dame has enjoyed a long and highly valued partnership with Ireland in many areas. Today we are officially dedicating a new space, St. Joseph's Hall, at Kylemore Abbey, that will extend the partnership to the beautiful and culturally rich western regions of Ireland. Our programs will benefit students and faculty from Notre Dame and Ireland, and will continue the spiritually rich traditions started by the Benedictine Sisters, to whom we are most grateful."

When asked about his inclusion of the Roll of Honor Justice Peter Kelly said, “It is a signal honor to be conferred with an honorary doctorate by Notre Dame University on this historic occasion. I greatly appreciate it and wish this new and exciting cooperative venture between the university and the Benedictine nuns every success.’’

Mother Máire added, “The partnership with the University of Notre Dame will strengthen our foundations in Kylemore and the West of Ireland, and, at the same time, open up Notre Dame’s global network of communication and mission for the spirit of St. Benedict. We are all deeply honored by the conferral of the honorary doctorate on a member of the community. The opportunity of cooperation with Notre Dame is a huge blessing for all who are involved with us in our work here.”

Over the past 11 months, 35 local workers renovated a wing of Kylemore Abbey to cater for the living and classroom requirements of visiting students. There are now five locals employed in the center, which last week became the home for 100 visiting Notre Dame students.

As part of an immersive community engagement program the ND students spent a day painting and decorating local community centers and halls in the neighboring villages of Leenane and Letterfrack. Also, as part of the 'Inside Track' program, they helped to tidy and clean the nearby Church of Ireland cemetery in Letterfrack.

The Notre Dame Center at Kylemore Abbey’s programs will combine the scholarly rigor of Notre Dame with the Benedictine tradition of spirituality. World-renowned scholars will also be invited to teach Notre Dame and Irish students in a spirit of collaboration and partnership with other colleges.