A member of the Mohawk Nation will study the Irish language at the Connemara Gaeltacht in Ireland this summer as the first participant in a new scholarship program. 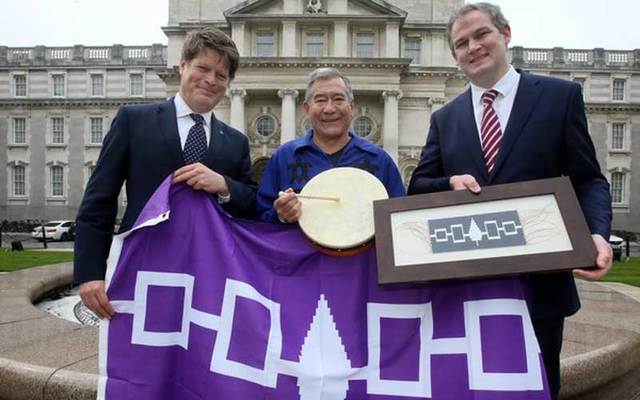 A member of the Mohawk Nation will study the Irish language at the Connemara Gaeltacht in Ireland this summer as the first participant in a new scholarship program.

Minister of State for the Irish Language, the Gaeltacht and the Islands Seán Kyne and Mohawk Grand Chief Joseph Tokwiro Norton announced details of the new annual scholarship at a ceremony at Government Buildings in Dublin last week, during which the two men also exchanged gifts, The Irish Times reports.

This summer, a scholar from Kahnawá:ke, a First Nations territory located in Québec, will attend a three-week Irish language course in An Cheathrú Rua, in the Connemara Gaeltacht while staying with a local family.

The €2,000 scholarship, which is jointly funded by the Department of Arts, Heritage and the Gaeltacht and the Mohawk community, will be administered by the Ireland Canada University Foundation (ICUF).

Mohawk Grand Chief Norton, who was presented with a bodhrán by the minister, said: “We are here because of language and because we are attempting to bring together our people as much as possible – to learn from each other and experience from each other what we cherish: our language and our culture.”

“It’s not just about the language, it is about knowing the cultural and historical background, to bring that back home, and talk to our people about the same struggles that this country is going through – that we are going through too as Mohawk people.”

Minister Kyne, who was given a Mohawk symbol and flag by the grand chief, said he hoped the program would foster links between Ireland and the Mohawk people.

“It will be be our honour to welcome a Mohawk scholar to An Cheathrú Rua. Like the Irish, the Mohawk people are known across the world for their rich culture, heritage and language.

“It is important that we build those cultural links. The Mohawk Nation was occupied and repressed in the years gone by as this country has. We have the shared commonality of a language under pressure, of a population under pressure, of pressures from English and everything else.”