Getting Creative in County Limerick! 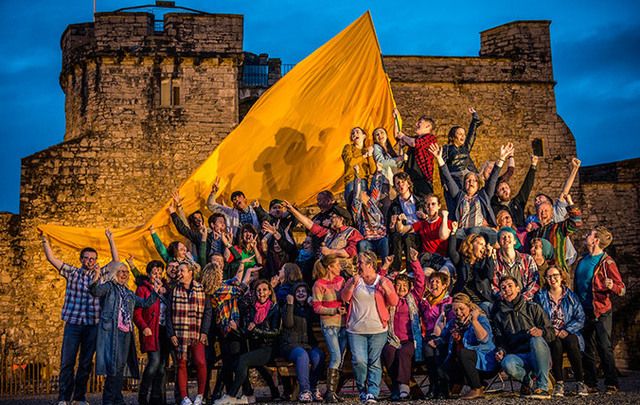 Get creative at the Lifting the Siege in Co. Limerick. Creative Ireland

This year, government initiative Creative Ireland is highlighting some of the best projects, events, and initiatives that are bringing culture and the arts to the forefront in every Irish county and Co. Limerick is no different.

Celebrating the urban and the rural, Limerick is a county with a high international profile and connection with its communities and sense of itself that have all been formed through its upsurge in cultural activity. A dynamic force on Ireland’s western seaboard, Limerick's investment in culture in recent years has positioned the city and county as a vibrant, exciting and progressive place to be.

We especially recommend these upcoming events, which are a part of the Creative Ireland county initiatives and beyond, as well as several on-going projects that constantly ensure the promotion of creativity in the county.

Artists in Schools program enhances and diversifies creative education at primary school level by providing students with opportunities to actively engage in cultural production while working with professional creative practitioners.  In 2017, Limerick Arts Office introduced a structured program working with local festivals to build their capacity around education and provide young people with access to stimulating creative activities.

Elemental Arts and Culture Festival takes place in September in Limerick City. The festival encompasses the arts in all their guises and is guided by a green ethos. Art hunts, animation, and art classes, street fests and more. September 8-10, 2017.

The Mary Immaculate College Children’s Choir is a university - school partnership developed to make meaningful links with primary schools. MIC student volunteers and staff visit the schools on a weekly basis to work with children on a common repertoire. Children perform in MIC twice per semester in a ‘Big Sing’ involving all participating schools. Although an existing project before 2017, it will be deepened as a direct result of Creative Ireland this year.

Symposium on Jack B. Yeats and Paul Henry – Hunt Museum

This year, the Hunt Museum’s annual symposium will focus on the massive impact of the works of painters Jack B. Yeats and Paul Henry, in tandem with an exhibition displaying some of their finest works. September 29, Limerick City.

Limerick City and County Council Archives and Mary Immaculate College have committed to a major oral history project to capture and index the memories of the fishermen and other linked trades. In 2017,  communities living along the banks of the Shannon Estuary reaching from Parteen to Foynes, and including fishermen, reed cutters and net makers will be asked to contribute their stories for possible inclusion in a digital sound archive as an essential first step in the preservation of these stories.

The HearSay Audio Arts Festival is a celebration of creative audio in all its forms, including radio features, film sound, sound art, theater sound, music and audio fiction. From September 29 - October 1, 2017, the world’s finest audio makers will descend upon the town of Kilfinane to share and teach their arts, and to compete for the 2017 HearSay Prize. This year’s theme is “Discovery.”

The Limerick Film Archive was created to locate and acquire film, video and cinema material of Irish interest, with particular emphasis on items relating to the mid-west region. Since its inception, the archive has been successful in acquiring over 100 film titles, over 800 hours of video material and a large file on local and national cinemas.  Creative Ireland funding will this year help leverage other sources of funding to begin the digitization of this important collection.

In Limerick City and across the county, buildings of architectural and cultural interest will open their doors to the public for free. Part of the global Open House movement. October 6 - 8, 2017.

The West Limerick Singing Club was formed in 2002 in Abbeyfeale and holds monthly singing sessions that give a platform to singers from the local community as well as visiting singers. It supports and promotes singing and storytelling in English and Irish. The club holds an annual traditional singing weekend in honor of Garry McMahon from October 20 - 22 in Abbeyfeale.

Members of Moyross Community Drama and members of St. Mary’s Women’s Group will bring the stories of senior citizens from the community to life in a dramatic performance. November 7 - 9, Limerick City.

Is there an upcoming event in Limerick you think people should know about? Tell us in the comment section.