Getting creative in Dublin City! 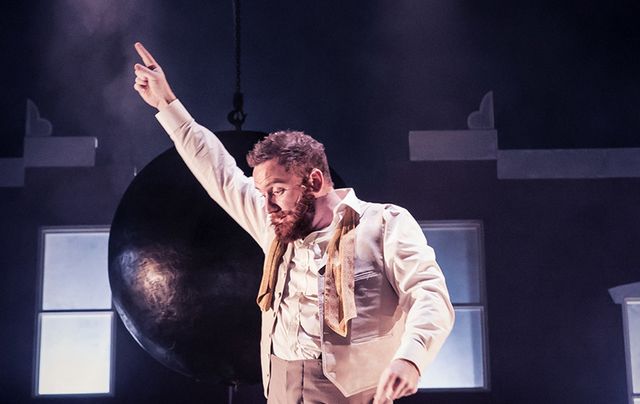 What's on in Dublin City? Dublin Theater Festival is just one of the many creative and cultural events in Dublin City. Rory Nolan

This year, government initiative Creative Ireland is highlighting some of the best projects, events, and initiatives that are bringing culture and the arts to the forefront in every Irish county and Dublin City is no different.

With UNESCO City of Literature status and ever-evolving creative nous, culture is at the very heart of Dublin’s identity and quality of life, already world-renowned for its captivating cultural heritage. The presence of Dublin's culture is central to making a vibrant city that is an appealing destination for tourists, the city’s residents, and its creative industries.

Here are some of the best events and long-term initiatives you should know about in Dublin City:

Words on the Street – A European Literature Trail

Word in the Street.

Join a literary evening, listening to well-known personalities such as Sharon Ní Bheoláin, Bryan Murray, Rick O’Shea, Johnny Ward and Katherine Lynch read from translated works of European literature. The event will also be joined by UK author Kit de Waal, who will read from her novel "My Name is Leon".

The first reading is at 6.30 pm with readings every half hour after, the final one at 9 pm.

Opera in the Open

Opera in the Open.

Opera in the Open is an initiative of Dublin City Council that presents live performances of operatic work in the open air in Dublin City Centre. This much loved annual opera season takes place every Thursday during the month of August at the Dublin City Council Civic Office Amphitheatre, Wood Quay, Dublin 8.

Each performance of opera is undertaken in an abridged format, is narrated in English and lasts one hour during lunchtime from 1 to 2 pm. There is no fee for attending these performances.

Opera in the Open proves, beyond a doubt, that there is a significant audience for opera in Dublin. Nestled in the heart of the city, what better way to soak up this beautiful summer in Dublin than to catch an aria or two at lunchtime every Thursday in August.

Performances this summer include Rita (Gaetano Donizetti) on August 17 and Gianni Schicchi  (Giacomo Puccini) on August 24.

This year, top historians and authors from Ireland and abroad are lined up, including Robert Harris, Janina Ramirez, Ian Kershaw, Chris Patten, Robert Service, Lyndal Roper, and Martin Bell. There will also be many Irish historians talking about topics as diverse as the funeral of Thomas Ashe, life at the court of the Sun King, the death of poet Francis Ledwidge, Dublin and the Bolshevik revolution, women’s lives in the Big House, the role of women in the First World War, the Bolshevik Revolution & Dublin, and much more.

All-in-all there will be over 80 events at the 2017 Dublin Festival of History and they are all free. Full lineup to be announced on August 31.

The Children’s Art in Libraries Programme (CAL) is a unique initiative directly influenced by its distinctive context that seeks to provide innovative high-quality arts experiences for children of all ages. It aims to provide children accessing the services of their local library with the opportunity to participate in and gain meaningful and imaginative experiences through the arts.

The Hard Working Class Heroes Festival is an annual showcase festival and conference for new and emerging Irish music and technology, supported by the Dublin City Local Enterprise and Economic Development Office. It is one of the most important European festivals for those wishing to discover new Irish music.

Now in its 15th year, HWCH has been instrumental in helping musicians, bands and singer-songwriters take their careers to the international stage.

The Ocean After Nature

Through the work of twenty international artists and collectives, The Ocean After Nature considers the ocean as a site which reflects the ecological, cultural, political and economic realities of a globalized world. At Dublin’s renowned Hugh Lane Gallery, September 7, 2017 - January 7, 2018.

The UNESCO City of Literature Office has been running the Reader in Residence Programme successfully for a number of years. There are now three Readers in Residence working in the North East Inner City region with primary school children in the school environment and young people in non-school settings such as youth clubs and community centers.

Bluefire Street Fest 2017 is a World Cultures Festival, facilitated and supported by Dublin City Council, which will take place on September 16 on Smithfield Square. Now in its fifth year, the day is a stirring and colorful celebration of Dublin’s diversity with an emphasis on integration through the arts.

Last year’s event featured a stellar line up of musicians including Kila along with a range of creative workshops. Bluefire 2017 will once again attract thousands to celebrate the Capital’s cultural diversity.

Develop your Creativity at the Library

Get involved with Creative Ireland at you local Dublin library.

Dublin City Public Libraries offer a number of inspirational events and workshops to develop your creativity this autumn. The Business Information Centre at the Central Library will host a talk by Jennifer Rothwell on starting your own fashion label on October 19.

Explore different drums and rhythms at the Music Library’s drumming workshop with Neil Dowling on October 10 or try a Song writing and Developing Taster Workshop on November 4. This exciting introduction to the art and craft of song writing will be facilitated by acclaimed songwriter Niall Donnelly and musician-producer Gavin Ralston, in association with Waltons New School of Music’s Outreach Programme.

Creative Writing, painting and crafting groups meet in selected libraries across Dublin City. Why not join your local group and be inspired to get creative this autumn!

The Digital Skills Project is a joint initiative between Dublin City Public Libraries and The CoderDojo Foundation. It will offer the children and young people in Dublin’s North East Inner City region the opportunity to learn basic computer programming for free by attending a CoderDojo in a DCPL library.

The Augustinian Abbey of St Thomas the Martyr

Creative Ireland at the Augustinian Abbey of St Thomas the Martyr.

The Augustinian Abbey of St Thomas the Martyr was originally founded in 1177 on behalf of Henry II. Though no physical evidence remains of St Thomas’s Abbey today, it played a vital role in the development of Dublin’s western suburbs, and it is remembered in the name of the street close to where it once stood.

A series of events in Dublin 8 from October 12-14 will remember this once magnificent abbey and its important role in the medieval city:

The Abbey of St Thomas the Martyr Symposium

A day of talks and lectures on the archaeology, architecture, and history of the Augustinians and the Abbey of St Thomas the Martyr, Dublin 8.

The Bram Stoker Festival playfully celebrates the gothic, the mysterious, the after-dark and the thrill of late October as Ireland approaches Halloween and Samhain. The packed program of events mixes family-friendly adventures with late-night antics for mates, dates, and everything in between. Late October.

Enjoy a range of walks and talks, exhibitions, performances, film and sport throughout the city.

Jacob's Cream Crackers. An example of what can be seen in the new factory archive exhibit.

Drawing on historical documents, artifacts, oral histories and other sources contained within the vast Jacob Biscuit Factory Archive held at Dublin City Library and Archive, this major exhibition explores all aspects of the factory’s twentieth-century history and its impact on the lives of Dubliners.

Colorful panels will demonstrate the history of the factory, the workers, the products it produced and its role in Irish life. Find out the fascinating history of the Jacobs cream-cracker, who was the marketing genius to develop the concept of Jim Figgerty, and how major national and international events from 1916 Rising to World Wars impacted the business, customers, and staff.

Dublin’s Culture Connects is a program of activities and projects which seek to build on engagement and connection/re-connection in the city. These programs include The National Neighbourhood; The Fundraising Fellowship, Dublin and The Cultural Audit & Mapping Project.

The (Y)OUR STORY project has brought together a diverse range of communities in Ballyfermot, Drimnagh and South Circular Road to work together with artists to tell their stories, exchange culture and skills, and co-create a new version of ‘our’story.

Opening late summer 2017, the Dublin Tenement Museum, located at No.14 Henrietta Street, will help to spread understanding of the history of urban life and housing in Ireland, through people and memory.

Is there an upcoming event in Dublin City you think people should know about? Tell us in the comment section.