Getting creative in Co. Leitrim! 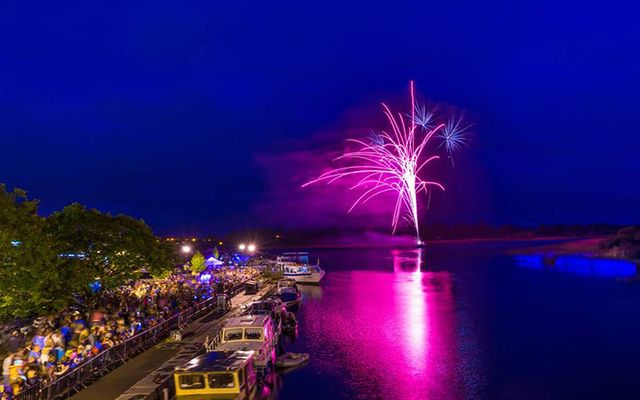 What's on in Co. Leitrim? The Carrick Carnival is just one of the many cultural and creative highlights Keith Nolan

This year, government initiative Creative Ireland is highlighting some of the best projects, events, and initiatives that are bringing culture and the arts to the forefront in every Irish county and Co. Leitrim is no different.

They don’t call it Lovely Leitrim for nothing - from Lough Allen to its Atlantic coastline to the charming town of Carrick-on-Shannon, there’s so much to see and do. An impressive range of creatives has called Leitrim home, such as explorer and naturalist Thomas Heazle Parke, journalist Paul Williams, actor Patrick McGoohan, actor and playwright Donal O’Kelly, author John McGahern, comedian Katherine Lynch, and 19th-century poet John McDonald.

The county today boasts a strong network of communities rich with artists, writers, actors, filmmakers, dancers and musicians, and one of the highest percentages of creative sector employment in the country.

The following events - part of the Creative Ireland counties initiatives and beyond - are real standouts in Leitrim’s bustling cultural calendar.

The Last Wilderness by Cecilia Darnell

An exhibition of the works of Swedish artist Cecilia Darnell takes place at The Dock in Carrick-on-Shannon June 2 - August 16, 2017, expanding upon her show at Galway City Arts Centre in March 2017. In addition to her stunning paintings of Scandinavian landscapes, the exhibition features an experimental film piece, shot on Super 8 film in the forest landscape at Bona, County Östergötland and The Old Theatre in the town Vadstena near where Danell is originally from.

Weaving together a series of metaphorical meditations on the complex relations between humans and plant-life, including current environmental threats to the bee, Lundy’s exhibition activates an assemblage of everyday objects, moving images and the ephemeral performance of materials to challenge autonomy in the face of systemic and applied homogenization. A personal testament to the fragile life-forms that cohabit nature Lundy’s work draws inspiration and incorporates elements from diverse sources. Appearing between July 21 - August 12 at the Leitrim Sculpture Center.

The Wild Words Children’s Book Festival, which takes place in the lovely town of Carrick-on-Shannon between August 11 - 13, is a space for children and their families to celebrate and enjoy literature, to meet authors, and to encourage an interest in creative writing. Now in its fifth year, the festival offers readings, workshops, masterclasses, in addition to publishing winning entries of writing by teenagers from throughout Ireland. The talented young winners get to participate in an intensive master class program led by leading authors.

As part of a new partnership, Sligo, Leitrim and Roscommon County Councils are coming together with filmmakers from the three counties with a view to enabling the film sector here to grow and develop.  Filmmakers and artists working with film who live in the three counties will contribute to research for the project, helping shape the thinking and range of supports that is hoped will grow the sector in the coming years

Arising from the John McGahern seminar which ran from 2007 for eight years, the Iron Mountain Literature Festival was established in 2016, reframed in a wider context involving writers, artists, and thinkers from many perspectives. The festival draws much of its motivation from the works and legacy of the legendary Leitrim-born writer John McGahern, combining panels, talks, readings and field trips which look to ideas central to and arising from an exploration of place, home, and identity.

The 2017 Festival, running on October 6 and 7 in Carrick-on Shannon, examines the role of culture in a time of crises of borders and migration and features Henry Glassie, Emeritus College Professor of Folklore at Indiana University Bloomington, poet Nuala Ní Dhomhnaill, Ireland Professor of Poetry Eiléan Ní Chuilleanáin, and many more.

The Artist in Communities Program will this year provide the opportunity for a community group in Leitrim to work with an artist on a specially designed project lasting 55 hours over the course of a number of months. The scheme is built on the idea of partnership. The artist and group work together to develop a lasting, memorable and enriching project for everyone involved.

Leitrim Library Service will present a comprehensive program of lectures engaging leading academics, artists, writers, historians and thinkers covering topics ranging from heritage, the arts, the environment and the many facets of the creative sector. Check the event schedules for Leitrim libraries in the winter months.

Is there an upcoming event in Co. Leitrim you think people should know about? Let us know in the comment section.