Getting creative in Co. Kilkenny! 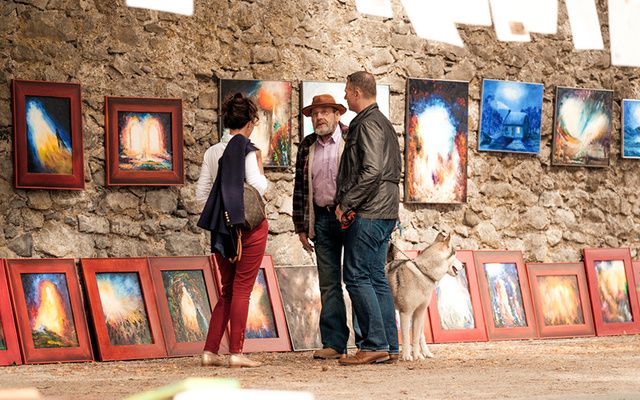 What's on in Co. Kilkenny? There's lots of creativity and culture to explore, from the Kilkenny Arts Festival and beyond. Finn Richards

This year, government initiative Creative Ireland is highlighting some of the best projects, events, and initiatives that are bringing culture and the arts to the forefront in every Irish county and Co. Kilkenny is no different.

Kilkenny is a bastion of culture in Ireland. Featuring architecture from as far back as the Stone Age and modern-day national cultural agencies like the Heritage Council and the Design and Crafts Council of Ireland, Kilkenny attracts the cream of the crop of makers, thinkers, and players to its cities and towns, and turns out its fair share of notable creatives, too. Architect James Hoban, best known for designing the White House in the Washington, D.C., was a Kilkenny native, and singer Seamus Moore also claims the county as his home. Kilkenny is also home to the famous Kilkenny Design, and the Oscar-winning animation studio Cartoon Saloon.

We especially recommend paying attention to these upcoming events and initiatives, which are a part of the Creative Ireland county initiatives and beyond.

The Ballykeefe Amphitheatre at Old School in Kilmanagh, Co. Kilkenny boasts a state-of-the-art canopy which perfectly complements the astounding natural acoustics found here. Show include concerts by The Riptide Movement and Ham Sandwich, in addition to a production of "Around the World in 80 Days."

Support and training will be offered to local communities in 2017 to record and map field names, building on the success of 2016 field names book launch.

This was an enchanting day out for the entire family in Shankill Castle, Paulstown, Kilkenny back on July 23. Visitors and locals alike enjoyed lots of fairy tale-themed fun including bouncy castles, archery, a treasure hunt, fairy trail and the chance to meet some of your favorite fairytale characters. All events and activities except wand-making were free.

The Rhyme Rag, featuring the work of young Kilkenny writers, was a poetry publication begun in 2005 before moving online to www.rhymerag.net in 2010. Throughout 2017, the publication will concentrate on developing a ‘Young Ensemble’ of writers to strengthen the future of the online poetry publication for young people.

The Arts Festival is an opportunity to encounter extraordinary artists and unique collaborations in the magical ancient buildings and gardens of Kilkenny. Since 1974, the Kilkenny Arts Festival has brought the best in classical music, contemporary music, poetry, and craft workshops to Kilkenny. This year's festival ran from August 11-20 so be sure to look out for it in 2018.

The historic nature of the MacDonagh Junction shopping site is well documented. On the grounds of the current shopping mall, was the former Union Workhouse built in 1842 which accommodated up to 1,300 local poor people. When the Famine began in 1845 the Poor House quickly became the City Famine Workhouse. This year, interpretive signage and a community art project will be introduced to the McDonagh Junction to raise awareness of the human stories at Kilkenny Workhouse.

Kilkenny Heritage week takes over Kilkenny Town (pictured) and beyond.

From exhibitions, guided Tours of Kilkenny Castle, Shankill Castle and the Dunmore Caves to a Hawkeye Bird of Prey experience, there really is something for everyone to enjoy in Kilkenny’s Heritage Week. Over 90 events will take place throughout city and county from August 19 to 27, 2017.

This truly unique festival is set in Gowran Park with built-in facilities and a giant dance floor. Expect music and dance with some of the best country musicians in Ireland including Mike Denver and many more. Begins August 20.

A fully fledged festival that features art, music, food, and crafts, and a whole host of fringe activities. Graiguenamanagh, for one weekend only, turns into a book lovers' paradise where booksellers are matched up with a number of empty spaces in the town. August 25-27, 2017.

One of Ireland’s premier food festivals, the Savour Kilkenny Food Festival will take place October 27 - 30, 2017. While the full schedule won’t be released until September, you can expect all sectors of the food industry to be represented. The Savoury Village transforms into a foodie haven with heaps of delicious tempting food stalls, celebrity chef cooking demos, talks, workshops, competitions and unique dining events. Classes for kids, too!

The Cope family have resided in the 300-year-old Shankill Castle in Paulstown for 25 years. They run a ghost tour through their home in October, inviting guests to explore the mysterious happenings of the haunted castle and graveyard with them on ghost tours and murder mystery dinners. Originally a Butler tower-house, Shankill Castle, Paulstown, Co. Kilkenny is a Queen Anne house built in 1708 and named after the old church and graveyard, located in the castle grounds. The ghost tours are night-time and candle-lit.

A member of the Cope family leads the tour through the most haunted areas of the castle and graveyard and relays the tales of past residents, along with an account of the recently recorded paranormal experiences. The ghost tours are not for those under the age of 15, but the castle also hosts events for younger children during the daylight hours, including wand and quill-making workshops. October 2017.

Get into the festive mood with Kilkenny’s annual Yulefest during the run up to Christmas. Kilkenny’s enchanting festival of music, food, craft, and entertainment is fun for all the family. Take a stroll through the many markets hosting a variety of crafts, food and warming drinks. It’s a fantastic way to spend an evening when this winter wonderland lights up the night sky. Watch exclusive performances at the Medieval Mile Museum or why not try your hand ice skating at Cillin Hill. Weekends in December.

Since 1998, The Kilkenny Rhythm and Roots Festival has attracted some of the finest names in the Americana canon; acts like Calexico, Giant Sand, Ryan Adams, Alejandro Escovedo, Mark Eitzel, Guy Clark, and more. From midday to midnight audiences wind their way through the medieval streets sampling the huge range of music in the 30 plus venues, hosting over 30 acts from Ireland, USA, Canada, UK, and Sweden, with over 80 ticketed and free shows. May 4 - 8, 2018.

Is there an upcoming event in Co. Kilkenny you think people should know about? Tell us in the comment section.