Getting Creative in County Donegal! 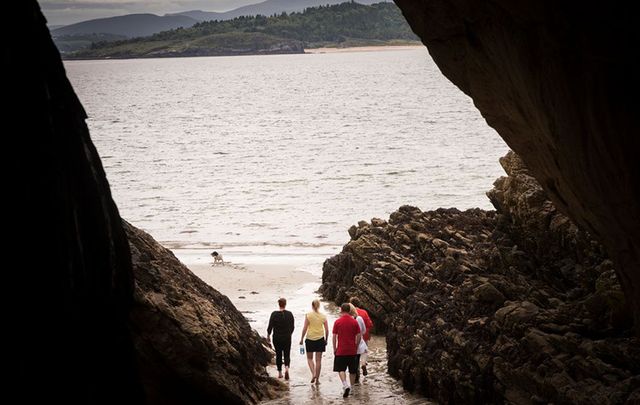 This year, government initiative Creative Ireland is highlighting some of the best projects, events, and initiatives that are bringing culture and the arts to the forefront in every Irish county and Co. Donegal is no different.

An attractive destination for artists and makers, with the landscape itself often serving as inspiration, Donegal has a world-renowned traditional music heritage.

Here are some of the best events and long-term initiatives you should know about in Co. Donegal:

County Donegal is the county with the most Heritage Week events per head of population in Ireland with over 120 events taking place across the county from August 19 - 27. Events include family open days, guided walks, built heritage open houses, heritage site visits, field trips, exhibitions, illustrated talks, historical re-enactments, traditional skills demonstrations, storytelling, traditional music and children’s activities. The aims of Heritage Week are to raise awareness of the natural, built and cultural heritage and to encourage its preservation and conservation. This year’s theme is ‘It’s in Your Nature’ and aims to shine a spotlight on the links between people, place our natural heritage.  National Heritage Week is coordinated by The Heritage Council and Local Authority Heritage Officers and the County Donegal Heritage Office produces the free, pocket-size County Donegal Heritage Week Event Guide. Further details are available at: www.heritageweek.ie

This extraordinary reading program is taking place at libraries around Donegal throughout the summer/ Each child is invited to register for the adventure at their local library and enjoy reading many books during the summer holidays. All participants are given a Summer Stars Reading Card to record and track their own progress and a library reward stamp will be added to their reading card at the library after each book read. At the end of the adventure, all children who participate are invited to attend an award event at which they will be presented with their own Summer Stars certificate. Children and families will also have access to fun reading activities on the Summer Stars website, www.summerstars.ie. 9,000 books have been borrowed this summer already – that’s a lot of reading!

The Culture Night program is led by the Arts Office with events hosted by the Central Library, the county Museum, the Heritage Office, and the Regional Cultural Centre as well as by a wide range of local organizations and venues with an interest in culture, history and heritage. September 22, 2017.

Both the minutes of meetings and papers relating to the Fanad Health Club, a 1930s District Nursing association; and a thesis in two volumes by Patrick O’Neill, 1940, entitled ‘A Social and Cultural Study of Crofter Life on the West Donegal Seaboard’, will be digitized from Donegal County Archives this year,  invaluable collections that will add greatly to the understanding of life in Donegal.

A festival of arts for Donegal’s south and southwest, Blue Stacks presents a rich and varied program of contemporary, classical and traditional music, theater, opera, carnival, visual arts, street arts, literary events, events for children – both within and outside of school – in a host of towns and villages including Ballyshannon, Bundoran, Ballybofey, Donegal, Mountcharles, Dunkineely, Killybegs, Cill Chartha, An Carraig, Gleann Choilm Cille, Ardara and Glenties. The Children’s Theater component, which gives kids the chance to enjoy performances in both English and Gaeilge, was an important element in the festival but had to be scaled back in recent years. However, this year with Creative Ireland support they are re-introducing the program. Venues in South and South West Donegal, September 28 - October 8.

It is proposed to conserve professionally two leather-bound Gweedore hotel visitors’ registers dating from 1842 – 1874 that are held at the County Archive. The registers contain vivid handwritten comments by visitors. There are stories, poems, treatises, sketches and drawings relating to the hotel itself and life in rural Gweedore, then the centre of controversial land improvements carried out by Lord George Hill.

Visitors include the rich and famous of the time, such as Robert William Wilde, Sir James Dombrain, Thomas Carlyle, John Mitchel, Thomas Emerson Headlam and the Marchioness of Londonderry.

Wainfest is an annual week-long, countywide arts and book festival dedicated to children. The term "Wain" is a local affectionate word used when talking about a small child (wee one). And we think it's a great fit for our festival that caters just for them! Since its inception in 1996 the festival has grown from strength to strength and is one of the highlights in the Donegal County Council's calendar of events. Wainfest plays a pivotal role for schools and homeschoolers in the area allowing them to access the very best in children's performances.  Begins October 7-15

A Vanished World- The Landed Gentry of Donegal-Exhibition

Curated by Donegal County Council’s Museum and Archives Service in association with the Heritage Office, the free exhibition explores the world of the landed gentry in Donegal in the decades before the foundation of the state. The event will uncover stories of those who lived and worked in the vanished world of Donegal’s big houses. Donegal County Museum, September 16 -December 31, 2017.

The Local Enterprise Office (LEO) will facilitate creative sector networks in a) film and digital media, b) fashion design and textiles and c) craft and design in 2017. The LEO is organizing a creative festival and workshops in the performing arts in Malin over a weekend in December with a focus on how to integrate business and creativity. The event is also meant to raise awareness for the potential to increase commercial sustainability.

Donegal's premier summer festival! A celebration of multidisciplinary arts taking place each July in the North West of Ireland along the Wild Atlantic Way. Look out for it July 2018.

Is there an upcoming event in Co. Donegal you think people should know about? Tell us in the comment section.