The reopening of the historic wings of the National Gallery of Ireland is being commemorated with a special piece of music by renowned Dublin musician Colm Mac Con Iomaire. 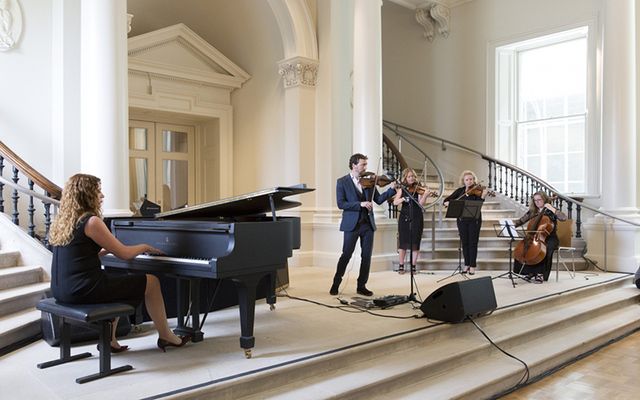 Colm Mac an Iomaire playing at the reopening of the National Gallery in Dublin. Creative Ireland

Following six years of closure to the public for refurbishment, the reopening of the historic wings of the National Gallery of Ireland is being commemorated with a special piece of music by renowned Dublin musician Colm Mac Con Iomaire.

In keeping with the National Gallery of Ireland’s commitment to fostering new artistic connections, Irish fiddle player Colm Mac Con Iomaire has been commissioned to to create a bespoke musical composition inspired by the reopened space itself.

Mac Con Iomaire was selected for his status as a much-loved musical talent in the traditional as well as contemporary arenas, an approach that reflects the gallery’s offering of both masters and modern works and communicates its message of creative diversity.

A founding member of Irish music group Kíla, which he formed while still in school, Colm is perhaps best known for his position in Irish indie-rock group The Frames, whose rise to international acclaim has been well-documented.

As well as performing, the Dublin musician scores theatre, television and film soundtracks and produces his own solo work. Taking listeners on a journey, his work is rooted in old culture and acknowledges the value of creating space for the new.

While composing his commission for the National Gallery, Mac Con Iomaire spent a lot of time in the historic wings before they opened to the public. His musical interpretation reflects the feelings, emotions and memories stirred by the works of art within the renovated space.

The resulting piece – Old Walls – shares its name with a Jack B. Yeats painting. To Mac Con Iomaire, this work of art symbolises everything the gallery wants to achieve with the new refurbishment, ‘tearing down the walls of the gallery and giving it back to the people of Ireland’.

The piece was performed at the reopening on 14th June, 2017, which was officiated over by former Taoiseach Enda Kenny, on what was to be the final public engagement of his tenure. Old Walls is also the soundtrack to Inspiration for the Nation, the video created by the National Gallery of Ireland with Moose Productions from Galway to celebrate the reopening and featuring the voice of award-winning Irish actor Ned Dennehy.

For even more cultural activities this summer and beyond, take a look at the Creative Ireland Dublin City plan for 2017. Full of events, festivals and programmes, this is just the first of five year-long plans to boost culture and creativity in the capital city.