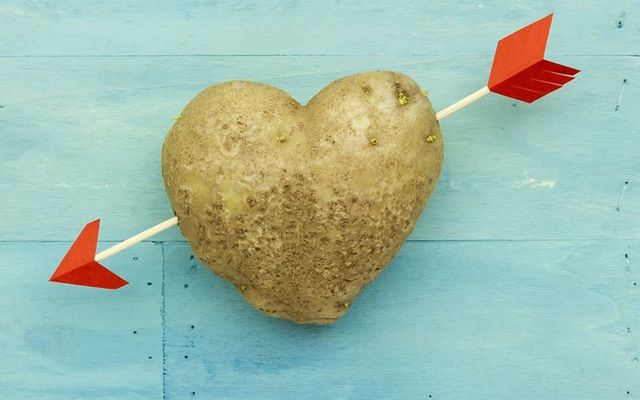 The Irish have a way with words, even when it comes down to describing a potato! iStock

Editor’s note: Jan 18, is marked as National Thesaurus Day, and quite frankly we couldn't resist! Impress your family and friends today by playing up the Irish stereotype and sharing with them this massive lexicography of potato loving words.

The potato, for better or worse, has played a major role in Irish life and as such, despite being a vegetable, it’s had quite an influence on Irish culture and even on the Irish language.

Such was the relationship between the people of Ireland and the lowly spud that a simple search of the Irish terminology database téarma.ie will uncover no fewer than 90 different terms involving the word potato (though, granted, not all completely linked to the edible kind).

The need for greater speed was obviously important when discussing potatoes as several concepts relating to the food that would require a phrase or string of words to describe in English are mashed down to one-word terms in Irish.

The main Irish word for potato is “práta” (prawh-tah) and it’s this word that is used most of the time. There are loads of other options, however, if you wish to be more precise.

We take a look at some of the most spud-tacular words.

Sadly, the word paidrín is also the Irish term for the rosary. Could this be a reflection on your need for a prayer if your potato crop turned out to be small?

Even the sound of this word makes us think of something mushy.

The term “creach” by itself means a loss or a pity, perhaps another nod to the need for large potatoes. “Póirín” can also mean “small round stone.”

“Peil” is also the Irish for football and if you add “caldar” before the words “fir” or “mná,” you can describe a big, robust man or woman.

The Irish were obviously very concerned with the potato crop turning out small and unusable.

day 10 of growing a potato plant in my locker. making progress! #DailyPotatoUpdate pic.twitter.com/eDpAlWn7UN

A potato set is a potato or a part of a potato used as a seed.

These three terms refer solely to the part of the potato that is left once a part has been taken away to be used as a seed.

A seed potato is a potato that has been planted and used for the production of seeds (like a potato set). Falcaire specifically refers to the potato once it has been used for this purpose.

“Brú” means to force or to put pressure on.

Looking forward to being a couch potato tonight. pic.twitter.com/m89GRqUGv7

Ok, so this is not an exact description of a potato but we still thought it was a cool word. Use it on any lazybones who can’t get up from the couch and see their looks of confusion.