It's unclear how he got in there, but he seemed perfectly content! 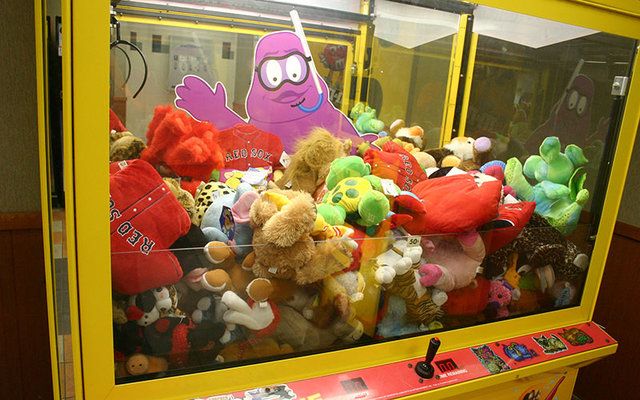 Arcade claw grab games are frustrating, we can't blame him for wanting to take matters into his own hands! Wikimedia Commons

A mischievous young Irish boy got trapped inside an arcade toy machine to the amusement of his father and people worldwide. A video shot by the boy's father has already garnered over 225,000 views on Facebook.

Three-year-old Jamie Bracken-Murphy became an online sensation after he found himself on the wrong side of the glass of an arcade claw machine at Jump ‘n’ Gyms play center in Nenagh, County Tipperary.

Jamie’s father, Damien, came across his son waist deep in a pile of cuddly toys, much to his amusement. Jaime himself didn’t seem too overawed by the occasion, focusing more on which toy he would like to get his hands on.

Luckily nobody was injured during the incident. Employees at the center were quick on hand and with the help of an off-duty firefighter Jaime was safely returned to his father and five-year-old brother Shane. Damien recalled the situation by saying he heard muffled complaints coming from behind him before realizing what had happened.

“I turned around and just see Jamie's face looking out from behind the glass. I wasn't surprised at all really. He's a very mischievous, sharp kid who's always pushing boundaries. He was inside for about 10 minutes and was worried for maybe 10 seconds at the start but then he just found it hilarious.

"Luckily, a fireman was there and is used to dealing with situations like these. He told Jamie to crouch down and then he was able to shimmy out. He got to keep two dragon toys after picking them up inside. He's not embarrassed about it or anything, he just laughed about the whole thing."

Claw machine games are notoriously difficult to conquer but in the end Jaime’s little trick worked as he ended up winning two dragon toys as prizes. This isn’t the first time something like this has happened.

In 2014 18-month-old Colin Lambert found himself in a similar situation when he climbed into a claw machine in Maryville, Tennessee here in the US. While in 2015, Henry Howes, a young boy aged four, was also causing mischief when he got stuck in an arcade game in Tamworth, Staffordshire in England.