Cardinal Dolan really has some nerve lecturing Obama on morals 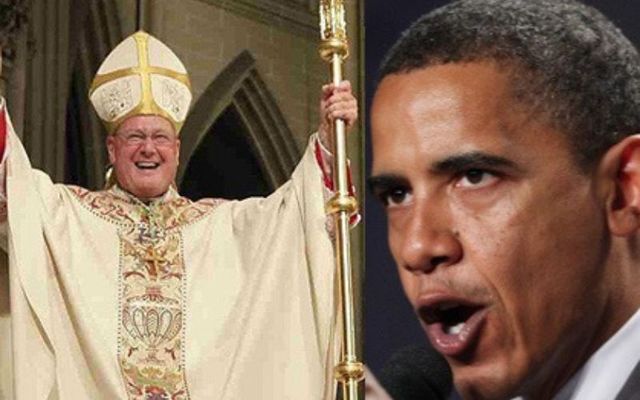 Ignore for a moment the fact that 95 per cent of Catholic women use birth control anyway and consider instead the story yesterday from Milwaukee.

There, a long-lost diocesan document has turned up making it clear that then Bishop Dolan paid $20,000 on at least two occasions to pedophile priests in order to spur their departure from the priesthood.

These two pedos were not handed over to the police. They received a $20,000 reward and walked away Scot-free as far as Bishop Dolan was concerned.

The only defense of these actions I have seen is that the Catholic Church was not alone in covering up pedophile activity.

That is akin to saying Nazis were not the only ones who hated Jews. Child molesters of any stripe or religion must be stopped – we know that

But Dolan has now gone on to the highest office in the Catholic Church in America. If he were in General Motors after this week’s revelation, he would likely be fired and might well face a court for covering up and abetting the pedophiles.

In the American Catholic Church the matter is hardly noted.

Is that too harsh or am I missing something here?

The ones I feel most sorry for are the ordinary Catholics who desperately want to believe in their church but are finding with every passing week that there is something very rotten at the very top of it everywhere with the exception of a great man like Archbishop Diarmuid Martin in Dublin.

What gives this man Cardinal Dolan, who essentially excused the sexual abuse of minors the right to pontificate about morals?

Frankly, it would be laughable if it were not so sad.

Dolan is a huge star in New York, there are even whispers that he could be an outside candidate for pope in the next conclave.

He has an easy manner and a well-developed sense of public relations.

But let’s not lose sight of the fact that when it came to cover-up of one of the most grievous crimes imaginable, the abuse of innocent children, it appears Dolan was part and parcel of it.

He initially denied strongly he had made the payments saying it was preposterous to suggest he did.

There are many decent clerics in the Catholic Church who will never reach Dolan’s lofty heights but I bet they sleep easier at night.

Cardinal Dolan has lost all moral authority to lecture the rest of us, especially the president, on matters of morals.