We hear from Killian Stokes, co-founder of Moyee Coffee Ireland. 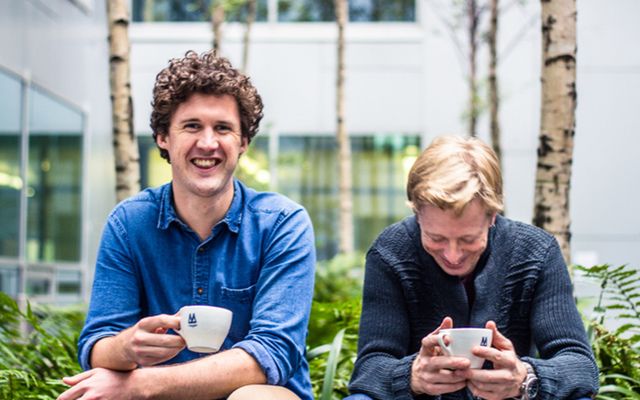 Tell us about Moyee Coffee Ireland?
We are a coffee social enterprise that’s trying to turn the coffee industry on its head. It was set up by Shane Reilly and myself in 2016. Our forest-grown, specialty coffee is produced from bean-to-bag in Ethiopia, so it supports five times as many jobs as fair trade. We call this FairChain.

FairChain is based on the principles of shared value, trade over aid and transparency. At the same time, we’re all about quality, not charity. Our coffee beans are amongst the finest in the world, ranking in the top 15% of all beans on the planet.

Why does your company need to exist, why is it important?
Coffee has become the world’s favorite drink. It’s bigger than wine, beer and alcohol put together. Each day we drink 2 billion cups of coffee, and the global coffee industry is worth almost €100 billion a year.

However, across the developing world, about 100 million people rely on coffee for their livelihood (that’s 25m coffee farmers and their families). These are amongst the poorest people on the planet. 90% of coffee farmers earn less than €2 a day while 90% of coffee growing countries still rely on international aid to survive.

The problem is the divide between growing and roasting. While 100% of all the coffee we drink is grown in and around the equator (in the coffee belt), most of it is exported out as raw green beans. With them, the value-add, the jobs, the knowledge, the expertise, the brand value and ultimately the profits are exported too. At Moyee, we want to change that and ensure more profits remain in the hands of the people who contribute most to our cup of coffee.

Who is your product solving a problem for?
In Ireland, our expectations when it comes to a cup of coffee have increased massively in recent years. And rightfully so. Tech workers in particularly drink 2-3 cups of coffee per day. Companies are under pressure to create genuinely great places to work. Good coffee at work, of course, is not going to dictate whether an employee decides to leave a role but it is part of the arsenal a company can use to create a good work environment where employees feel valued.

At the same time, people are asking more questions about where their food and drinks come from; from farm to fork and from bean to cup. We see ourselves as offering a solution to companies by supplying incredibly good coffee, with radical impact, to their office. Coffee should be better. The impact should be greater. We believe consumers want both those things!

Where do you aspire to get to and how long do you think it is going to take you?
We’re a social business, so our social impact aspirations always come first. We would love Moyee Ireland to be able to directly support an increase in coffee jobs in Ethiopia or another roastery along the coffee belt. Moyee does not want to stop at disrupting the coffee industry in Ethiopia, but we want to innovate and create impact in Kenya, Rwanda, Nicaragua, and all along the coffee belt in the next five years. We currently supply our coffee to Groupon’s head office in Dublin. We’re working on an impact project to link them with a coffee-growing community in the Limu region of Ethiopia.

As we supply more companies with our coffee, we want to be able to show the direct impact of each cup they drink and how it benefits coffee producing communities, from the farmers to those down along the coffee chain.

We’re part of a wider FairChain movement and want to change the coffee industry for the better in Ireland and the UK. We’re aiming to build up our main business in Ireland and the UK in B2B sales, but we also have plans to bring Moyee Coffee to a wider retail market and have a café home in Dublin shortly. Ethiopia is just a starting point for roasting coffee at origin, so we’re very excited to contribute to plans to roast coffee in Colombia, Kenya, and Nicaragua in the future.

Why are you doing it from Dublin?
Thanks to some great coffee trailblazers in the last decade, Dublin now has a thriving specialty coffee scene that’s growing year on year. In nearly every neighborhood in Dublin now, you’re never too far from an independent coffee shop. With Dublin the EU headquarters for so many large companies now, we want to bring this specialty coffee scene into the office and add some social impact for good measure!

What are the things you love about Dublin?
Dublin is a big, small town. We both grew up in Dublin, worked and traveled around the world, from Africa to South America, but there’s just something that always brings you back.

The connections you can make from within your network makes Dublin very special. You’re never more than one or two steps from the person you need an intro to. We’re looking to make connections and build a FairChain movement rather than just a social business. We think Dublin is the perfect environment for that.

This article originally appeared in the Dublin Globe. You can read more from them here.