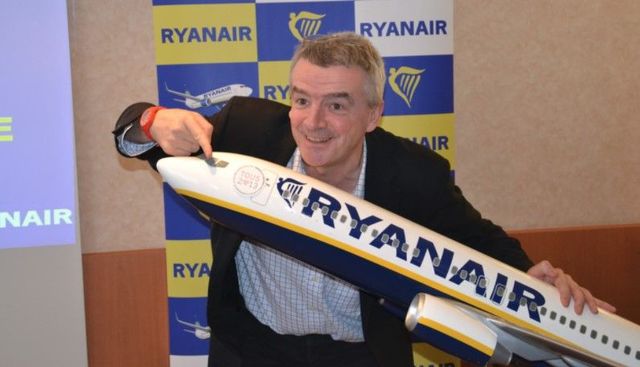 The Ryanair’s long-time chief executive has joined the ranks of Ireland’s few billionaires.

The majority of the 54-year-old's wealth comes from his holding in the budget airline. He currently owns a 3.91% stake, which is worth more than $905 million (€730 million).

O’Leary has been with Ryanair since the early 1990s. It was thanks to his vision that the airline transformed itself from a small service operating between Waterford and Gatwick, to its present day position as a  market leader in low-cost transfers.

His Cheltenham and Grand National-winning horses (War of Attrition, Don Cossack, and Rule The World) have also enhanced his personal wealth.

O’Leary ranks at 1,999th on the overall Forbes list (viewed here) and is one of 259 newcomers. He has also been initiated into the Global 2000: Hall of Fame CEOs.

The father-of-four lives in Wicklow with his wife Anita Farrell (below) whom he married in 2003.

Read More: What are the biggest billion euro businesses in Ireland and what do they do?

He is now one of nine Irish billionaires on the Forbes' list. The highest ranking Irish billionaire is of course, the forerunner of every Irish Rich List in recent times, Indian-born Pallonji Mistry.

Mistry, who is married to an Irish woman and has Irish citizenship, has an eye-watering fortune of $17.8 billion.

Along with O’Leary and the Collison brothers, Glen Dimplex founder Martin Naughton was also added to the list with a $1 billion fortune.

Amazon founder Jeff Bezos fortune was listed as number one this year, knocking Bill Gates off his throne. Bezos is worth $112 billion. Along with Gates, Warren Buffett, Bernard Arnault, and Mark Zuckerberg round out the top five.