Amazon news is regarded as a major boost for the workforce as hundreds of thousands have become jobless during the COVID-19 pandemic. 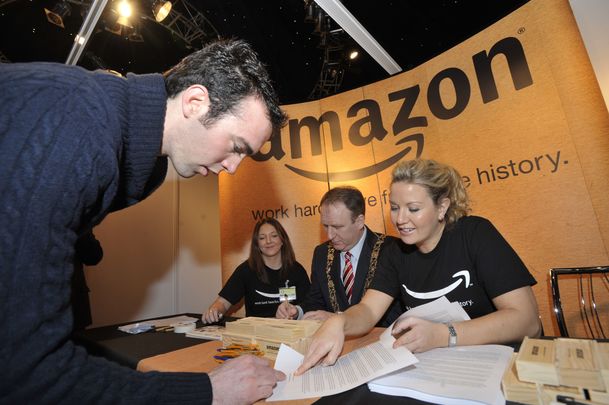 An Amazon kiosk at a 2011 Career Zoo event in Dublin. RollingNews

Tech giant Amazon will create 1,000 permanent jobs in Ireland over the next two years, bringing the company’s total workforce in the country to 5,000.

When the company previously announced 1,000 jobs over two years in June 2018 they were filled within 18 months.

Amazon says it expecting to fill the new roles faster than the two-year deadline it has promised.

The company is also planning a new campus at Charlemont Square in Dublin which will open in 2022.

The Irish Times reported that recruitment is already underway for the new jobs, announced on Monday. They are mainly in highly skilled roles and include engineering in software and associated development

As the COVID-19 pandemic has added hundreds of thousands to Ireland’s jobless figures, the Amazon news is regarded as a major boost for the workforce.

Amazon said a significant number of the new roles would be based at its Dublin offices in Tallaght, Blanchardstown and the city center, and Cork will also see a bump in recruitment.

A significant number of roles will be available to those who want to work from home, to add to a few hundred already working from home during the pandemic.

Mike Beary, Amazon Web Services Ireland country manager, said, “Before the whole COVID crisis started, we had begun recruiting people to work from home permanently for certain roles. That’s the nature of the jobs that they are in. We see that continuing.”

Amazon has been building its base in Ireland for about a decade.  Beary said that in the past eight years, the group has invested about €2 billion in the Irish economy. Adding in the subcontractors and suppliers, some of whom now work with Amazon on a global scale, that figure rises to about €5 billion.

Beary said Ireland is seen as an attractive place for Amazon to hire and grow.  It was the first place outside North America to build data center infrastructure, and so it remains one of the most significant locations for the company around the world.

Taoiseach Micheal Martin said the jobs announcement was “a further vote of confidence in the skills and talent of Irish people and will provide a welcome boost to our economy.”