The official cause of the sinking was due to negligence, but rumour and folklore persist that sabotage or even a curse could be responsible for the sinking of HMS Wasp. 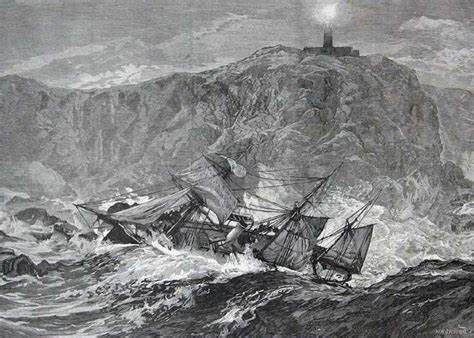 The sinking of HMS Wasp

In September 1884, a royal navy gunboat, on route to carry out an eviction sunk off the coast of Tory Island in Donegal. Smashed on rocks, she sank in just 15 minutes and 52 men perished.

The official cause of the sinking was due to negligence, but rumour and folklore persist that sabotage or even a curse could be responsible for the sinking of HMS Wasp.

Ireland in 1884 was a nation in turmoil, the scars of the Great Famine were still raw, two years previously the two most senior politicians in Ireland had been assassinated by the Invincible’s in the Phoenix Park and the Land War still raged all across the island.

It was in this atmosphere that HMS Wasp began her final journey from her homeport of Westport County Mayo to facilitate the eviction of three tenant families on the Island of Inishtrahull, which is the most northerly of the Irish islands lying six miles from Malin Head off the coast of County Donegal. Though uninhabited now, the last residents having left in 1929, the island supported several families in the 1880s as well as a lighthouse.

The Wasp began her active service, stationed in what was then called Queenstown, which we now know as Cobh, County Cork. Little is known of the Wasps earlier duties, but they are likely to have been fishery inspection and lighthouse provision throughout the Irish coastal waters.

The crew complement of the Wasp was 60 officers and men. In 1884, as the agitation of the Land war grew, she was moved to Westport to help quell civil disobedience and as a symbol of imperial power in a region that was a hotbed of civil unrest.

The Wasp commanded by 39-year-old Lieutenant JD Nicholls was ordered to report to Moville in County Donegal to pick up Bailiffs and Police, whom an absentee landlord had ordered to evict 3 tenant families, who had refused, or more likely were unable, to pay their rent on Inishtrahull.

Evictions at the time saw large deployments of armed police and in some cases the military to protect the bailiffs who carried out the actual evictions.

So, on September 21st, 1884 HMS Wasp left Westport to facilitate yet another eviction of poor farming families from their homes. Ironically, this was not the Wasp’s first visit to Inishtrahull, the year previously they had delivered a cargo of seed potatoes to the islanders donated by the Quakers Society of Friends.

HMS Wasp did not appear to be in a hurry, as she was under sail and her steam engine was turned off. In the early hours of the 22nd of September, she was sailing nine miles off the coast of North West Donegal and the island of Tory.

The weather was not classed as stormy or indeed hazardous. It was reported at Mullaghmore in Donegal bay, the nearest meteorological station to Tory Island, that the weather on Sunday night before the disaster was clear with a fresh westerly breeze and sky overcast.

It would later be reported that one of the crew remarked to lieutenant Nicholls before he retired, that the vessel was on course for the Tory Light House and the course should be altered. This could not be changed quickly as the vessel was not under steam but sail. The commanding officer replied that the ship was keeping the course he had marked out on the chart which would prove quite safe.

Nicholls like most of the crew including his other officers were now sleeping in their bunks.

Naval historians have always questioned why the Wasp was sailing inside Tory rather than out to her west, which would have given the ship greater sea room. Also being under sail meant she did not have the manoeuvrability that her steam engine would have provided.

The Wasp was well known in the waters but the navigator on duty was comparatively inexperienced as to the dangers of the Donegal coast and was unfamiliar with the terrain around Tory.

One of the officers ordered a sail to be shortened just before the gunboat struck the rocks, one of the seamen who survived told the officer this action would surely land her upon the rocks but was ordered to shorten the sail and he obeyed.

Collison on the rocks

At 3.55 am, the ship struck a reef directly under the Tory lighthouse.

The lighthouse stands on the north side of the island. It was erected in 1832. The lighthouse tower is 27m high and the light is 40m above sea level and can be seen for eighteen nautical miles when the atmosphere is clear. Reefs of rocks, portions of which are not visible at high water abound on the west coast in front of the island.

The initial collision broke the hull of the Wasp in two and she began to take on water at an alarming rate. Awoken from his slumber, the ship’s commander, Lieutenant Nicholls ordered the crew to take to the lifeboats. However, disaster struck, and the Wasp hit the reefs again. There was no hope for HMS Wasp as the impact shattered what was left of the ship and within 15 minutes the Wasp was underwater with only her masthead protruding from the Atlantic waves.

Five survivors clung to a spur of the gunboat which had detached from the wreck and were washed up on the rocks. One lucky man had a miraculous escape when the ill-fated ship cantered over, and he jumped from the rigging directly onto the rocks below.

The Quartermaster of the Wasp was saved, as was the man on the lookout on the forecastle (the forward part of a ship below the deck, traditionally used as the crew’s living quarters). Also among the three other survivors were the man at the wheel and two marines. No islanders saw the wreck happen and the lightkeeper was only alerted later by the cries of the drowning.

Fifty-two of their shipmates including Lieutenant Nicholls sadly perished.

The survivors stayed on Tory for 4 days well cared for by the islanders until a navy frigate HMS Valiant took them to Rathmullan.

After arriving in Rathmullan the survivors were moved on to Derry where they were treated as celebrities by a large crowd, even meeting the Derry Mayor at the time Mr McVicker. After a short stay in Dublin, the six survivors were summoned to Portsmouth for a court-martial.

A royal navy court of enquiry found that HMS Wasp had been lost:

“In consequence of the want of due care and attention”

All of the survivors were exonerated.

No one, not even the sleeping Nicholls and his officers were given the blame for the sinking and the court-martial verdict was consigned to history.

However, historians and others have speculated that the cause of the sinking could be related to either the Tory Lighthouse or even a curse!

Was the lighthouse light turned off?

The lighthouse theory speculates that there must have been someone or a group of people bearing ill intent towards the crew of the HMS Wasp.

Tory had a large Fenian element among the population, including the elected ‘king’ of the island, a man called Heggarty, who along with many on the island had feared that the Wasp was en route to Tory for evictions rather than Inishtrahull. Perhaps Heggarty and the islanders were intent on resisting any evictions that might be planned.

What we do know from survivor reports is that the lighthouse light was on after the collision, but could it have been switched off before the Wasp struck the reef?

Some speculate that given the navigational skills of lieutenant Nicholls it is unlikely that the ship would have crashed if there had been a proper light source such from Tory.

Lieutenant Nicholls was also a well-respected seaman with a track record of successfully navigating the dangerous waters of the northwest, and this was reinforced by a resolution passed by the piers and Harbour’s commissioners’ days after the disaster

The fact that the lighthouse light was never mentioned at the court-martial does suggest that it did not play a major role in the sinking of the Wasp.  So, while the ‘Lighthouse theory’ that the light was deliberately runoff, has its adherents, there appears to be no hard evidence of any conspiracy to do this.

Was it a curse?

The ‘cursing stone’ on Tory.

One other theory, or perhaps local folklore, is that HMS Wasp was sunk through the use of the Tory Island ‘cursing stone’ once again by islander’s fearful of a future eviction themselves.

Tory did indeed have such a stone at the time called ‘Cloch na Mallacht’ or ‘Cloch Thorai’. Folklore links the stone to St Colmcille and the pilgrimage route around the island ‘An Turas Mor’.

But whether one believes in curses or not, one fact we do know is that the cursing stone disappeared shortly after the sinking of the Wasp. The local priest Fr Michael O’Donnell had it removed, and to this present day, no one knows or perhaps is willing to tell, where it is.

I tend to believe that three factors contributed to the sinking of the Wasp.

The waters of the North Atlantic off the coast of Tory are notoriously dangerous and despite the forecast mild weather, hours before the Wasp sank, another tragedy took place when a local fishing boat capsized just miles from Tory. A boat containing three local fishermen capsized near the area where the Wasp went down and two of the men drowned, Morgan Sweeney and Hugh O’Donnell. The brother of Hugh O’Donnell managed to swim to shore.

While there is no disputing the evidence that Lieutenant Nicholl was an experienced navigator, who had great knowledge of the waters around Tory, he was in bed asleep when the boat sank. The officer of the watch was completely unaware of the dangers that lay ahead. Could a more experienced seaman have perhaps steered the ship to safety?

The Wasp was under sail when she sank. She would have had more manoeuvrability and speed if she had been utilising her steam engines. Was the fact she was under sail complacency or perhaps a cost-cutting exercise?

These three factors, all with evidence to back them up, are far more powerful reasons for the sinking of HMS Wasp than a Tory conspiracy or a curse. However, no matter the reason for the sinking, we must remember the 52 men who lost their lives in this tragedy.