Steam power, the Famine, and the state of Irish public transport

IrishCentral Contributor Dara Burke looks at the history of public transport in Ireland and how it's shaped today's transport options, especially for visitors. 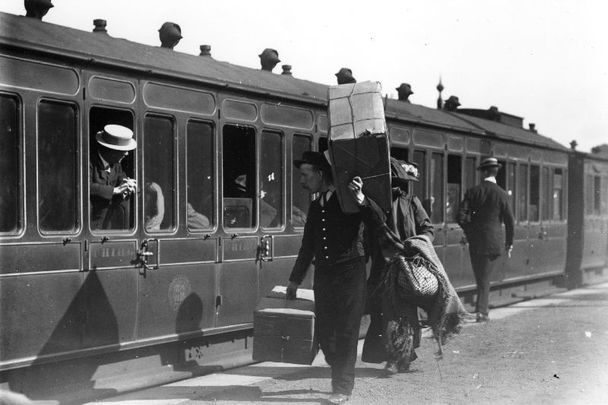 Planning a trip to the Emerald Isle? You'll want to spend as little of your precious vacation time waiting for a bus or train as absolutely possible. Here's what you should know before arriving on these shores.

Unfortunately, you can't rely on the public transport system (eg. Buses and Trains) exclusively if you wish to visit every castle, rolling green countryside location, and cultural hotspot on your itinerary during your Irish vacation. Here's why…

The coming of steam power to Ireland

We'll start our journey with the phenomenon known as the industrial revolution which started in England during the early 19th century.

Picture the scene; Ireland - a British colony at the time. Saw the development of an extensive rail network across much of the country - mostly by private industry and investors. With most rail lines leading to or from Dublin, much like today's rail network.

So why were many of these lines ripped up at the start of the last century (120 years ago)? And why is Ireland left with a skeleton rail network covering just a fraction (one-third) of the country by comparison today?

The Demise of Irish Trains (or Steam Locomotives)

First, it might interest you to know, the size of Ireland’s population is a little more than half today (5 million people) of what it was in the pre-Famine era around 175 years ago (around 8.5 million). Millions died during the Famine or emigrated in coffin ships to escape starvation.

Second, the invention of the internal combustion engine and the subsequent invention of the automobile in the early 19th century made it more convenient and faster to travel by road in such a small country. So an extensive train network was no longer needed.

Well, that's my attempt at explaining why the rail network is so restricted. But what about the public bus network?

Why you shouldn't rely on the public bus service in Ireland

The explanation for the hit-and-miss bus service is simple. We build our cities outwards in Ireland, countries with greater population densities than ours tend to build upwards as well as outwards.

This, combined with the very low population density in the countryside, means it's just not economical to run a regular bus service.

Ireland's also had bad experiences with high-rise building developments in the past. The infamous Ballymun flats - built rapidly during the 1960s in Dublin - were notorious for social deprivation and crime for example.

Speaking of crime, some of our local politicians and city planners back in the 1980s were notoriously corrupt. The epicenter of this corrupt political cartel formed around Dublin city and its suburbs. This led to some erratic planning decisions due to these politicians, some of whom were later imprisoned, soliciting bribes from property developers at the time.

Many housing estates in Dublin were subsequently built some distance away from cities due to corrupt planners. These estates still required some sort of bus service. Buses had to travel further through underpopulated areas to complete their route. This meant the bus took longer to complete its route, hence the longer wait.

The conclusion is simple; what's left of the rail network mostly serves major metropolitan areas and their environs. Today, you can't reach much of the hinterland by train, unfortunately.

Also, don't rely on buses to get you from point A to point B quickly anywhere outside of city centers. You'll end up waiting, sometimes for long periods - especially on a Sunday and/or national holiday.

The only silver lining to this transport problem in Ireland is that many of the old rail lines have been redeveloped into cycling greenways criss-crossing the country today.

Trains and buses are still a viable option for some, however, you should know what you're getting yourself into in this regard. Come prepared and plan accordingly

Enjoy your time in Ireland should you ever get the chance to make the journey. Ireland is a wonderful travel destination and is well worth the effort.

As we say in Irish: "May the road rise to meet you" on your journey.