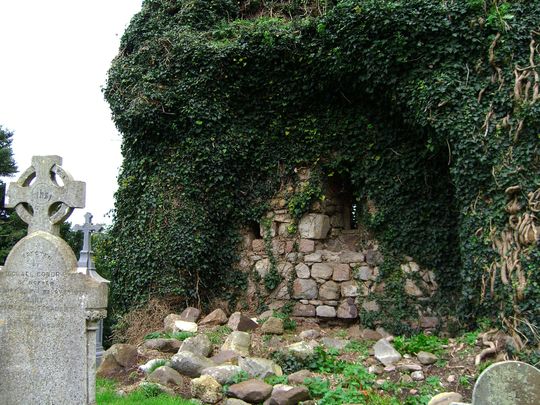 We loaded the car with our coats and cameras, made sure we had a water jug, and then set off.

We took the N-52 East to the R-162 North, the graveyard being only about twelve kilometers away. We stopped at the Centra store in Nobber and asked the cashier where the graveyard was. She pointed just up the road and told us to turn right at Keoghan's Pub. This took us to an old iron gate, beyond which was a private residence. We could see the graveyard just past the house. Tom got out of the car, opened the gate, and walked to the house.

A dog stuck its nose around the corner of the house and began barking wildly. Tom knocked on the door and a woman answered. She said sure we could come through the gate, and don't worry about the dog, he was just an old grouchy thing. Tom opened the gate all of the way, drove the car through, and then closed the gate behind us. He pulled close to the wall of the graveyard and we both got out of the car, me with a camera and Tom with a video cam, both of us ready to record some of the history found in this old and beautiful graveyard.

The old graveyard had lain in an overgrown condition, in sad disrepair, for many years. In 2004, a group of local citizens decided that it would be to their advantage to tidy it up. As they worked clearing away the weeds and brambles, they discovered an old abandoned church, the wall of an ancient monastery, as well as some very interesting burial plots. It took the group of 12 men two years of working weekends and nights in all four seasons to accomplish their goal. What they had hoped for was to be put on the tourist and monument map alongside such famous archaeological sites as Newgrange and Knowth. Unfortunately, this did not happen. But glad we were that they had done such lovely work, for the graveyard is a wonderful sight to behold.

Up the stairs to the grounds we climbed, curious about what we would find. At the top of the stairs, what we saw before us was the only remaining wall of the old monastery. The ancient stones were entwined and overgrown with ivy, really old ivy, some of it having roots that were at least six inches in diameter. Flowers and weeds grew from the cracks between the stones, all the way from the ground to high up in the sky. It was beautiful.

There was the old church as well, off to one side, probably a few hundred years old, which had been left to decay and ruin some time ago. A tree and some weeds grew from its rooftop. We wandered separately, Tom taking videos and I taking the still photography. There was a mixture of old headstones, slabs, and new headstones.

The two most interesting slabs were those of what must have been a knight and a monk. The slab that appears to have belonged to a knight has a carving of a skull and crossbones, a sword, and even perhaps a servant, possibly female. The stone is decorated with Irish knot-work, and what appears to be perhaps the representation of the sept or family crest.

The one that we believe entombs a monk is less elaborate, but also has a relief of a skull and crossbones, although this one is very time-worn. From what we understood, both are dated from before the tenth century C.E.

Throughout the graveyard were small, plain headstones and rocks, most unreadable, covered with lichen and very old, along with larger more decoratively carved memorials which were easily read, ranging from April 25th, 1796 C.E. to September 4th, 1996 C.E.

I suspect that there might even be a gallery grave located here. The graveyard was very interesting and would warrant another visit on our next journey to Ireland. I highly recommend anyone interested in graveyards to please visit this one. It is well worth it.

Upon leaving, I opened the gate by the house for Tom to drive through, closing and chaining it behind me, all the while watching for the grouchy old dog to appear and nip at my heels.