Vandalism of 5,000-year-old tomb in Ireland cannot be repaired

The Loughcrew Cairns are thought to be older than the Newgrange passage tomb but have been the subject of a series of acts of vandalism recently. 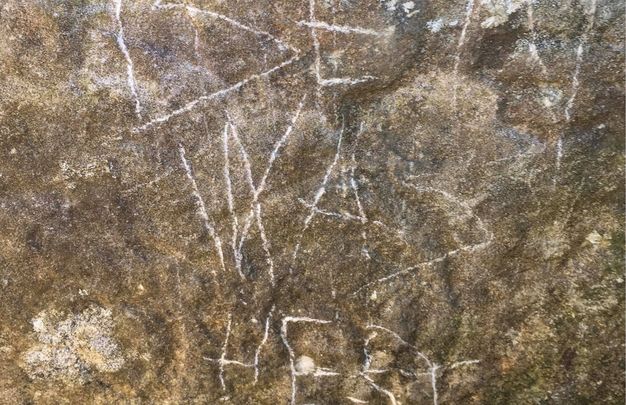 "Ben Was Here" was scratched into a cairn at Loughcrew, County Meath. Mythical Ireland Facebook

Graffiti etched into a stone at a 5,000-year-old neolithic tomb in County Meath is likely to be unrepairable, according to an Irish expert.

The graffiti, which included the words "Ben was here", was scratched into a stone at Cairn S in Loughcrew, County Meath - a network of passage tombs that date back to 3200 BC.

The Loughcrew Cairns are believed to be older than the Newgrange passage tomb in Brú na Bóinne, but they have been the subject of recent acts of vandalism and graffiti.

Andrew Murphy of Mythical Ireland said that some of the graffiti was etched over pre-existing megalithic art. Murphy also said that he didn't believe that the stones could be repaired.

"It’s very hard to say, it looks to have been etched by a stone, stone on stone. So, I would imagine no, it can’t be repaired," he told RTÉ's Morning Ireland.

"In one or two cases, the graffiti was actually scratched upon pre-existing megalithic art. This is precious artwork dating back more than five millennia ago."

"Whoever Ben is, I hope you feel proud of yourself for vandalizing a monument that is likely to be over 5,000 years old. Note that these markings have been made over precious megalithic art," Mythical Ireland said on Facebook.

VANDALISM AT LOUGHCREW Unfortunately there has been graffiti vandalism at Cairn U at Loughcrew. These photos were sent...

Patrick O'Donovan, the Minister of State with responsibility for the Office of Public Works (OPW), said that he was shocked by the act of vandalism that had "recklessly damaged" the megalithic cairns.

"The Loughcrew cairns are passage tombs of great antiquity. They are part of our cultural inheritance and I am shocked that some of the ancient carved stones at this heritage site have been recklessly damaged by graffiti," O'Donovan said in a statement.

O'Donovan also encouraged people to contact their local gardaí so that the culprits could be apprehended.

He said that the OPW is preparing a campaign with the National Monuments Service to raise awareness of the significance and vulnerability of Ireland's "beautiful" monuments.

Minister of State for Heritage Malcolm Noonan also condemned the incident and said that he would do everything he could to ensure that the culprits were brought before the courts.

"Our heritage sites provide important accessible spaces for the enjoyment and benefit of the public and it is shocking that anyone would think it appropriate to damage decorative stones left by our ancestors from thousands of years ago," Noonan said.

Meanwhile, the OPW and the National Monuments Service said in a statement that they were "dismayed" by the acts of vandalism carried out at the site.

The groups will be gathering all evidence related to the incident and will assist An Garda Síochána in the prosecution of those involved. The OPW additionally said that it has been forced to hire a private security firm to patrol the hilltops at Loughcrew every evening to discourage antisocial activity.