Remember the immigration lessons learned by our Irish ancestors

"When you show immigrants only the closed door and the hard word... You are squandering your rich Irish inheritance for a mess of pottage." 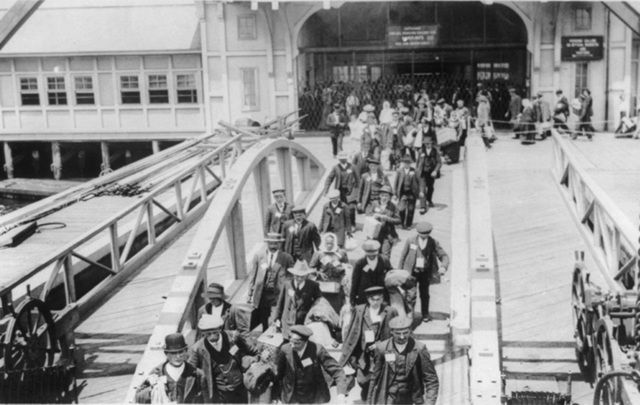 The Irish are famous for many things, but our hospitality usually comes near the top of the list. It’s an international reputation we have won that is richly deserved.

The consideration and kindness shown by ordinary Irish people in their daily interactions with strangers can take your breath away, creating a lifelong and favorable impression of the nation at home and abroad.

Many people seem to think our elaborate hospitality is hardwired into us, part of our DNA, as if to be born somewhere between Malin and Mizen is a guarantee of compassion, tact and exemplary manners. But it’s not hardwired into us; it’s very much a learned behavior.

So where did we learn it, our remarkable compassion? It may start at the point of our near erasure, the Year One that our history travels toward and from.

The Great Hunger was a near extinction event.  The devastation that it created across Ireland actually rivaled a low level nuclear attack.

When you walk through the near destruction of your culture, the pilfering of your lands and inheritance, the cruel starvation death of your loved ones and the inconsolable despair that follows all this horror, you learn the real measure of your own vulnerability and you will look into nothingness. You’ll be forever transformed by what you find.

When who you were is altered by what you have walked though, those hard lessons are handed on from generation to generation.

In many eastern religions the divesting of all worldly concerns is the ultimate aim. One must achieve a state of simplicity, and to achieve it one must often divest oneself of all worldly attachments.

In Irish history that divestiture, that stripping away of earthly attachments was provided by the blunt force of British colonialism, not by enlightened Buddhism. But some parallel lessons were learned nevertheless.

The spoils of this world are illusory, we discovered. Everything that seems solid and enduring can be stripped away in an afternoon and lost forever. Once it gone it can be lamented, but it will never return.

Because when Eden is lost it stays lost. When it falls it doesn’t rise up again. You can carry the memory with you but you can never return to it.

Knowing this fact changes people. It either breaks or makes them.

Irish history is full of violent expulsions, of people being sent out, cast out, exiled or banished. Our history, or poems and songs remind us of the fact: insecurity has been our lot and our lifeblood for centuries.

You must learn certain coping skills to contain the anxiety of knowing that nothing is secure, that the bailiffs will come, that the crops will fail, that the piano will drop. One of those coping skills is empathy.

You are at your most Irish when you begin to make no real distinction between king and peasant. Both are transitory roles, our history has taught us. Neither is an indicator of actual worth. Don’t put your faith in the showy illusions of this insecure world.

You are at your most Irish when you start to help other people the way those in the aftermath of the Great Hunger did, giving support and human solace as though they were stepping out of a still smoking blast crater, with their hair blackened from the explosion.

You are at your most Irish when you stop seeing strangers and start seeing their humanity. The core Irish reflex is sympathy after all. It’s built on an awareness that everything that looks fixed and fated can be toppled. It’s an awareness that’s at the center of who we are and how we conduct ourselves in the world now.

The Irish were never powerful. We didn’t build fleets of warships and sack Europe. We didn’t enrich ourselves with the purloined wealth of foreign nations.

We stayed home and built a complex culture and tradition that endured for millennia. We didn’t ask for it to be changed, or to be driven out of it.

You’re at your least Irish when you overlook or disregard the hard lessons your ancestors learned about the nature of compassion and its uses simply because you stand to make a quick profit in the present moment.

When you show immigrants only the closed door and the hard word, you are also showing it to all the people who raised you, taught you and cared for you. You are squandering your rich Irish inheritance for a mess of pottage.

You were raised better than that. Try to remember.