Kevin McGowan breached lockdown restrictions when he attempted to drive from Derry to Kerry to buy a puppy for his autistic son. 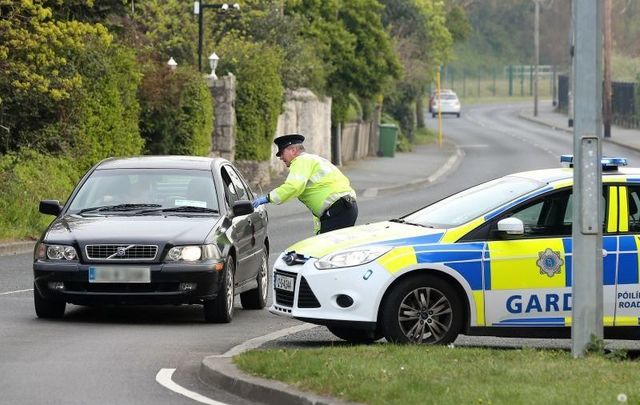 Gardai monitoring cars at a checkpoint on April 10, 2020 during Operation Fanacht. RollingNews.ie

A Northern Ireland man was arrested for breaching COVID-19 restrictions after driving cross-country over 280 miles from Derry to Kerry to purchase puppies.

Kevin McGowan, 36, said he made the 11-hour round trip to bring a Staffordshire Bull Terrier dog home to his six-year-old son who has autism.

McGowan, who admitted to ignoring garda orders to turn back after being found over 400km from home, said that because he was only 10 minutes away from picking up the dogs, he “took a chance” to drive on.

“I know I maybe shouldn’t have made that trip but I didn’t see any other way of getting the dogs,” said McGowan, according to The Belfast Telegraph.

“My wee boy is autistic and I was getting the dog for him. Because of this lockdown, his routine is all up the left so I thought if I got him a wee dog it would maybe help.

“I even phoned the woman I was buying the dogs off and told her that the guards were sending me back.

“I asked them (gardaí) could she come to me with the dogs and he said, ‘if she comes here I’ll arrest her too.’

“I thought it was a bit unfair, especially when you see yesterday that 180 Bulgarians were allowed in to pick strawberries.

“I didn’t even get out of the car. I left the house, drove down to get the dog and was driving straight back home.

“There was a girl in Belfast who had bought one as well and because I was making the trip down I was actually said I’d bring hers home with me so she didn’t have to leave the house. She was going to make arrangements to meet me.”

McGowan was stopped at a checkpoint at Dooneen, near Castleisland, Co Kerry, under Operation Fanacht. The nationwide operation, which grants Irish police new powers to enforce coronavirus restrictions set forth by the government, was launched earlier this month.

Under the latest COVID-19 restrictions, people must remain in a 2km distance from their residence.

McGowan, who works as an air conditioning engineer, told gardí that he was traveling to Tralee to turn off an alarm as part of his work for a security firm. When he failed to produce ID or a driving license, he was ordered to return to Derry, but McGowan reportedly drove off.

A description of McGowan was circulated to garda units in the area. He was arrested a short while later, and brought to Tralee Garda Station.

He denies that he made off from the checkpoint.

“It was 294 miles from my house to where I was going, by the time I got stopped there was 14 miles of the journey left.

“He (garda) told me to turn round and go back, but I got to the roundabout and thought, it’s only 14 more miles and took a chance and I drove on.

“By the time I got on the road another car came with the lights on came flying after me.”

Following his arrest, McGowan was before Judge David Waters at Tralee District Court, where he pleaded guilty to a breach of the Health (Preservation and Protection and other Emergency Measures in the Public Interest) Act 2020.

McGowan was sentenced to a month in jail, but has been freed on bail via a recognizance of €900 ($974) pending an appeal, The Belfast Telegraph reports.

McGowan, who will appear before Kerry Circuit Appeals Court in coming weeks, said he doesn’t know what to expect upon his return to court.

“I’m hoping that maybe the judge was in a bad mood that day and I’ll get fined instead,” he said.

“I don’t know and no one seems to be able to give me advice as it’s new legislation.

“I’ve heard they’ve had to let some prisoners out of jails to help with social distancing so maybe they won’t add to that by jailing me too,” he added.

He revealed his son would still be getting the pup from Co Kerry.

“We’ve been telling my wee boy for ages about the pup but luckily I didn’t tell him I was getting it yesterday because I wasn’t sure if I was going to make it back.

“But I’m actually getting the dog tomorrow. The girl in Belfast knows a fella who transports greyhounds so he’s going to do it.”