Republic of Ireland boss Stephen Kenny said it was "incomprehensible" that his team was booed for taking the knee for anti-racism. 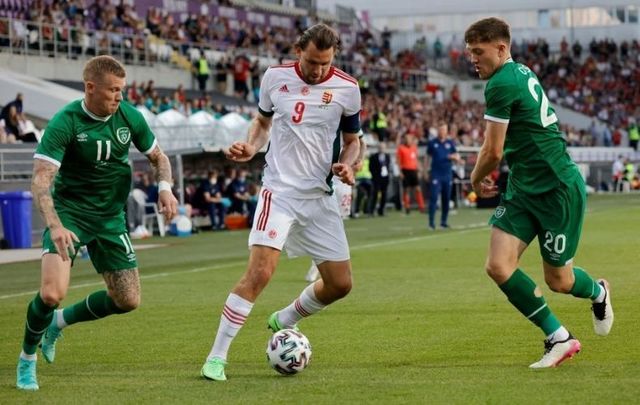 June 8, 2021: Adam Szalai of Hungary is challenged by James McClean and Dara O'Shea of Republic of Ireland during the international friendly match between Hungary and Republic of Ireland at Szusza Ferenc Stadion on in Budapest, Hungary. Laszlo Szirtesi/Getty Images

The Republic of Ireland players were booed as they took the knee in support of the anti-racism movement in football.

The Irish team played out a 0-0 draw against the Hungarians in Budapest on Tuesday night, June 8.

As the referee blew the whistle to commence the game, the Ireland players took the knee in support of football’s anti-racism campaign.

However, the Hungarians stayed standing, pointing the Uefa's "Respect" badge on their sleeves, while the home fans in the Szusza Ferenc Stadium in Budapest booed.

Republic of Ireland boss Stephen Kenny commented that the jeers did not bode well for Hungary ahead of their Euro 2020 finals campaign, which kicks off against Portugal in Budapest next Tuesday, June 15.

Speaking after the friendly game, he said: “I think it was the right decision.

"I approached [the Football Association of Ireland’s international operations manager] Barry Gleeson and said it was something we wanted to do, take the knee, and I think it’s a very important message.

“Our players wanted to do it. It’s important. It’s an important stance and I commend them for taking that stance.”

The Football Association of Ireland shared the clip on Twitter and said: "Proud of this team and proud of our values."

The Republic of Ireland's players were booed and jeered by some Hungary fans as they took a knee before kick-off in their friendly in Budapest. pic.twitter.com/15npHfKZcE