Mark, Diarmuid, and Tadg O'Sullivan died in a horrific murder-suicide on Monday morning. 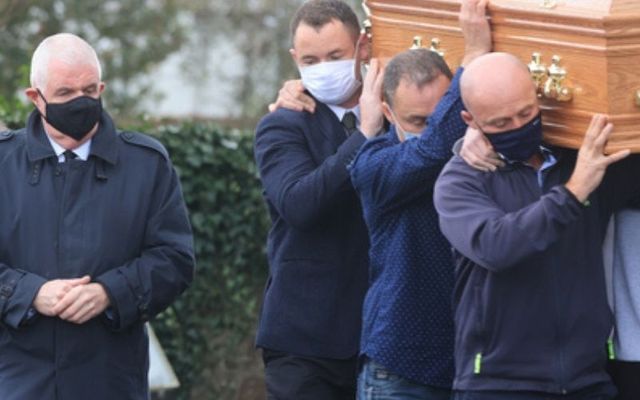 Mark O'Sullivan was laid to rest in Cork on Saturday. Rolling News

The third victim of a brutal murder-suicide in Cork was laid to rest in a church in Kanturk on Saturday afternoon.

Mark O'Sullivan was shot dead in a bedroom in his home in Kanturk on Monday as part of a tragic murder-suicide that claimed the lives of his father Tadg and his younger brother Diarmuid.

Mark O'Sullivan was laid to rest at 3:30 p.m. in a private service for family members only at the Church of the Immaculate Conception, Kanturk. The funeral mass was also streamed online.

Several media outlets have reported that a dispute over inheritance led Tadg and Diarmuid O'Sullivan to murder Mark at their farm in North Cork.

The father and son, who were buried together on Friday, were later found dead in a nearby field.

Thousands of mourners paid tribute to Mark O'Sullivan prior to his funeral on Saturday morning with friends describing him as a "cheeky, kind-hearted, gentleman" who left a lasting impression on them.

More than 1,200 people signed an online book of condolences ahead of Mark O'Sullivan's funeral on Saturday afternoon, with many messages coming from women who described themselves as "a mother" who sympathized with Ann O'Sullivan, the recently bereaved mother and wife.

Ann O'Sullivan was discharged from hospital just two weeks before the tragic murder-suicide following treatment for a serious medical condition.

The bereaved woman had planned to leave some of the family's 115-acre farm to her son Mark in her will, prompting her husband and youngest son to conspire to murder him, according to the Irish Times.

Ann O'Sullivan heard a commotion in the early hours of Monday morning when Diarmuid and Tadg O'Sullivan shot Mark seven times. She ran into the yard to call the police, but her husband and son chased after her and smashed her phone before informing her that they were going to kill themselves in a nearby field.

She then had to find her way through the early-morning darkness to a neighboring farm so that she could raise the alarm, but two further shots had been heard by the time members of An Garda Síochána arrived at the scene.