Annie Birney and Eoin Boyle have been on Great Blasket Island since June. 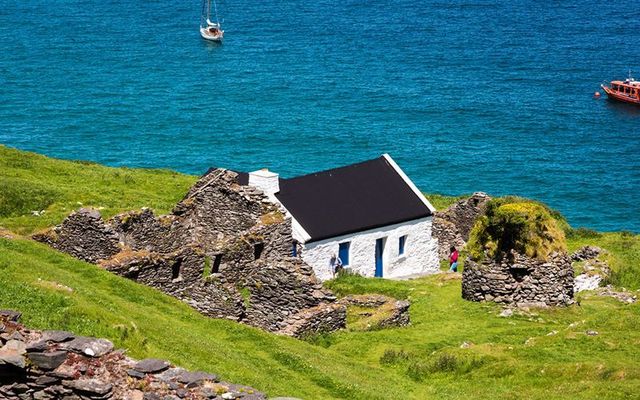 The lucky Dublin couple who became caretakers of the scenic Great Blasket Island earlier this year are preparing to leave the island.

Annie Birney and Eoin Boyle beat more than 45,000 applicants to the much sought-after role of caretaker on the remote island off the coast of Dingle and have spent the summer months looking after the guest accommodation on the island.

Like everywhere else in Ireland, Great Blasket Island has been deeply impacted by the coronavirus pandemic and, as such, Birney and Boyle's time on the island was far different than what they could ever have expected.

The couple were supposed to take up their post as caretakers in early April, but the Irish Government's COVID-19 lockdown put paid to those plans.

Instead, the couple began life on the island in late June, at a time when Ireland showed encouraging signs in the fight against the virus.

Even since then, it hasn't been a normal time on the island.

The island coffee shop, which Birney and Boyle were due to run, has been forced to remain closed to comply with social distancing guidelines, while the couple noted that they have had to take on extra cleaning duties when preparing the cottages for incoming guests.

"In one sense we’ve been busier than we expected. It’s frantic in the mornings, getting people checked out and getting the houses turned over for the new people arriving, so some days we wouldn’t get to see very much of the island," Boyle told the Irish Times.

The couple have been run off their feet at times this summer with more people choosing to holiday in Ireland than vacation abroad and Boyle said that it has been difficult to explore the island properly.

Ironically, it was during the storms that battered Ireland during the summer that the couple were able to explore the island.

Storm Ellen and Storm Francis both prevented boats from taking tourists to the island, giving Birney and Boyle an opportunity to recharge their batteries.

"It’s only in the storms, like Storm Ellen and Storm Francis, where we had a couple of days to ourselves because the boats couldn’t sail," Boyle said.

Living on a remote island in the midst of a global pandemic has, however, afforded Boyle and Birney some shelter from the coronavirus over the past three months.

Nevertheless, Boyle said that maintaining a safe distance from guests has become a key part of the job.

Now, however, the end is near for the Dublin couple. They are officially set to leave the island on Sept. 30, although they could be forced to remain there for longer if weather conditions aren't conducive to sailing.

While the couple say that they have enjoyed their time on the island immensely, Birney said that they look forward to having a hot shower once again.

Great Blasket Island has no electricity or running hot water, so luxuries like warm showers are but a distant daydream.

The couple have also had to make do without a fridge for the past three months, something that caused a wide range of problems.

"The one big thing we miss would be the fridge. It took us a while to get the hang of how to keep food fresh. We’ve figured out that we can usually get two days out of milk before our next delivery," Boyle told the Irish Times.

The couple said that their time on the island has enabled them to appreciate how difficult it was to live on the island before it became uninhabited in the 1950s.

"Several times when we’ve sat down to dinners here we’ve thought about the people who lived here all year round, and who depended on the land and the sea for their food. They must have had incredible skills."

Boyle and Birney both lived and worked in Dublin prior to landing the job of a lifetime on Great Blasket Island, but Boyle doesn't think they can go back to city life after their three months on the island.

"I don’t see us heading back to city living anytime soon," hinting at plans to relocate to the countryside.