The “Cercle Littéraire Irlandais” has now launched a call to the Irish Diaspora to join our circle of words. 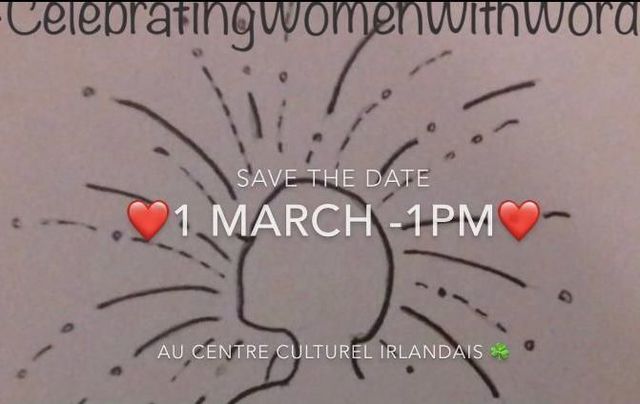 The “Cercle Littéraire Irlandais” has now launched a call to the Irish Diaspora to join our circle of words.

If you had to pick a city in the world to debate the motion “All you need is Love”, the obvious choice of location might have to be Paris.

Following ‘St Brigid’s Day’ and in the lead up to ‘Saint Valentine’s Day,’ and ‘International Women’s Day;’ celebrating love and women has hit an all-time high in the City of Light. The Embassy of Ireland in France held its first-ever Saint Brigid's Day celebrations this year, with events throughout the day featuring remarkable Irish women, leading lights in business, peace and human rights, and the arts.

This new wave of love kicked off on 31 January and reached a crescendo when all was changed, changed utterly, and a new ‘Irish Parisian debating Philosopher’ was born in the Centre Culturel Irlandais on 6th Feb, when the “All you need is Love”, motion was argued. An all UCD alumnus team tackled the against the motion team which comprised two TCD, one Oxford and one Maynooth College alumni. The debate chairperson, Cormac Ryan also democratically pointed out that in fact graduate or not, we are all alumni of something and indeed of life itself.

The eloquent presenter, Desmond McGetrick of the “Cercle Littéraire Irlandais” doubled as a champion on the ‘for the motion’ side. Chairperson, Cormac Ryan, managed both four-person teams, with King Solomon like judiciary. When the heat was turned up, both sides unscrupulously ignoring the bell, poached vital extra seconds, and had to be diplomatically but firmly towed in. We witnessed brilliant oration, well-rehearsed words, from the no fear, 'nimble thinking on their feet debaters'. Heckling was permitted, adding to the adrenalin rush of the moment. Scarily, spot-on questions from a packed house also added to the stimulation. In the debate video, you can see how love was examined and decorticated from every angle.

In the conference room, the audience were asked to choose their camp and sit on either the right side, ‘for the motion’ or left side, ‘against’. When the debating took off, the husband of one of the ‘against’ speakers made a sudden dive for the right, and the opposite side, as his wife, Louise Taylor-Scott debated, with much humor, the impossibility of keeping tedious at bay, in an eleven-year marriage.

Ciarán Mac Guill, with a tongue in cheek, stealthy strategy for the love motion accused the ‘against’ team of perhaps being serial killers! He pointed out that many Irish lost their lives during the reign and plantations of Elizabeth I, the founder of Trinity College Dublin and the very university from where two of the ‘against’ speakers hailed. She was also the daughter of Henry VIII who had absolutely no qualms about beheading two of his wives. Might the hereditary killer streak have trickled down to the TCD speakers and their Oxford and Maynooth cohorts? Patricia Costello, also for the love motion, had a softer approach; she spoke of the Big Bang, the wonder of the world and eternal love. It seems a love link between Paris and Dublin was being forged, while our valiant men and women debaters battled it out fiercely with wit and words.

Desmond McGetrick defended love throughout our lives as the secret ingredient that may raise life from the banal to the sublime. Mark Dillon, ‘for the motion’, showed us how a good debater can take one word, in this case “All” (you need is Love) and make a compelling argument. Edward Donelan sparkled intelligence in Latin while pragmatically reminding other speakers to keep it succinct, and reserve some love for the “wine and cheese” celebration after the debate.

At the end we were asked to go to the right or the left, the audience democratically nominating the winning team. Although the ‘against’ team argued their case with vigor, and despite Róisín Dockery pointing out the perils of unrequited love and warning, in the words of Oscar Wilde, “Love is like a war ! Easy to start but hard to end and you never know where it might take you,” love actually prevailed. In Paris, irrelevant of which team we were supporting, finally we were all reassured when the “All you need is Love”, motion was carried in the City of Romance.

In comparison with France, where star professional Philosophers are regular guests on the most popular TV talk shows and where ‘cabinets of Philosophy’ flourish, Ireland’s philosophical talents are often relegated to the debate floor, or strutted on the pub floor. At the debate, I realized the combination of blarney, sharp wit and intellect and being exposed over many years of Parisian living to French philosophizing, had spawned a new breed; the deadly ‘Irish Parisian debating Philosopher’. When Dúnlaith Bird took to the floor, and navigated her ‘destructive love’ argument, with expertise and intellectual precision, I also realized that though the most quoted philosophical thinkers have traditionally been men, the road was now being well-traveled by women. With our own Oxford debater on board, we had nothing to envy the Oxford Debating Society.

Taking the lead from the Paris St Brigid’s Day celebrations, the “All you need is Love” win, and anticipating ‘International Women’s Day’, the “Cercle Littéraire Irlandais” has launched a project in Paris #CelebratingWomenWithWord. We are calling on all Irish, in Paris, at home and abroad, to pen their thoughts, words, and philosophies to honor women. This is an opportunity to celebrate a woman you admire: your mother, sister, neighbor, mentor, regardless of nationality,...on social media, using the hashtags: #CelebratingWomenWithWords #StBrigidsDay

You are also invited to enter the “Cercle Littéraire Irlandais” competition with a short poem or prose piece, of around 500 words, before #Feb28 at 6pm Paris time. In these submissions, the woman described/admired in your paper should be Irish. Please submit your entries to Desmond McGetrick: desmond@dmcg.paris

Winners will be announced on 1 March 2020 at the #CelebratingWomenWithWords event at the Centre Culturel Irlandais where Lara Marlowe, The Irish Times #France correspondent will be the key speaker. If you plan to be in Paris on 1st March, and would like to attend the event please contact Desmond McGetrick to reserve places.

The bones of Saint Valentine can be found in Whitefriar Street Church, Dublin and love and celebrating women is currently very much on the pulse in Paris. A new cultural, love link is being forged even as we remember that some of the most renowned Irish writers, put their best words on paper in Paris.

Diaspora, don’t be left out! Join us and broaden this circle celebrating women, love, and words, spiral it worldwide, and pave the cobbled streets of the Latin Quarter with a new legacy of Irish words, wit, and philosophies.