The funeral for Ashling Murphy was held today, January 18, in the 23-year-old primary school teacher's hometown of Tullamore, Co Offaly. 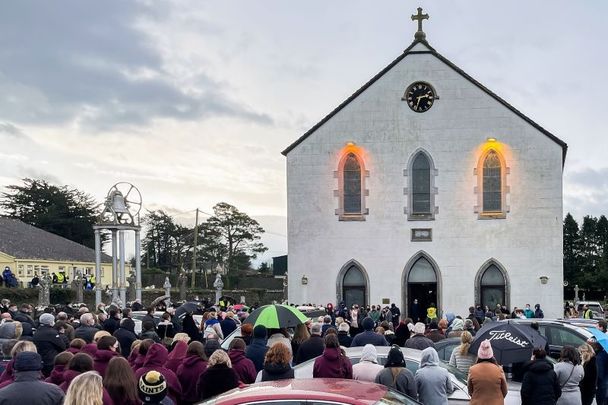 Ashling Murphy was laid to rest today, January 18, less than a week after her shocking murder on January 12 in Tullamore, Co Offaly.

Murphy, 23, was out for a jog along the canal in Tullamore when, around 4 pm that day, she was fatally attacked. Police announced just hours after the funeral on Tuesday that they had arrested a male in his 30s on suspicion of murder.

The funeral for Murphy was live-streamed online and was also broadcast by RTE News.

Ashling’s parents, siblings, and boyfriend sat in the front row at St. Brigid's Church in Mountbolus, Co Offaly for the service which lasted about an hour and a half on Tuesday morning.

Several politicians were in attendance at the church on Tuesday, including President of Ireland Michael D. Higgins and Taoiseach Micheál Martin. Both the President and the Taoiseach made their way over to Ashling’s parents, siblings, and boyfriend to offer their condolences in the church.

At the altar, musical instruments, a family photograph, a Kilcormac/Killoughey camogie jersey, and a hurl were presented as symbols of Murphy's life.

“Together we grieve, together we pray, together we hurt," parish priest Fr Michael Meade said in his homily. “This is the very heavy price we all have to pay for love.”

He added: “Today, we simply can only give thanks for having had some small share in the privilege of knowing such a wonderful and lovely human being.”

During the prayers of the faithful, read by Ashling's relatives, one prayer asked that "Ashling’s legacy live in the hearts of all she touched.”

Another said: “We pray that the many vigils that took place in memory of Ashling mark the beginning of an end to violence against women. May the candlelight tributes bring an everlasting hope to all those that live in fear.”

Speaking at the end of the mass, Bishop of Meath Tom Deenihan described the last few days as a "nightmare."

"A depraved act of violence which deprived a kind, talented, loved, and admired young woman of her life has since united the country in grief and support," he said.

He continued: "If there is a chink of light to last week's darkness, it must be the outpouring of support and sympathy that we have all seen.

At the request of the Murphy family, musicians brought their instruments to play in honor of the 23-year-old, who herself was a talented musician.