Send a potato to your enemies’ business a runaway success

Creative Texan entrepreneur is earning $10,000 a month sending personalized potatoes in the mail. 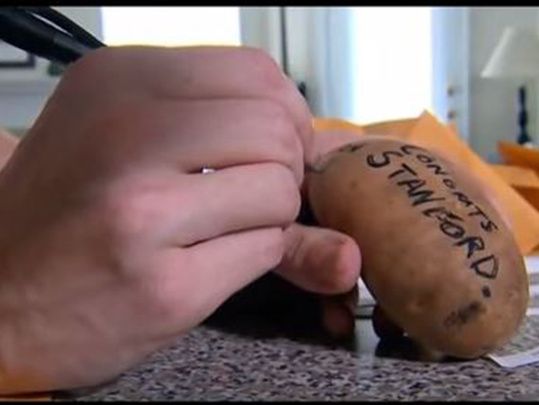 Sometimes your weirdest and most unlikely ideas turn out to be your best.

When US entrepreneur Alex Craig first came up with his new revenge-seeking/prank idea, he was told it was the stupidest idea ever heard. After just three months, chipping away at his new start-up, however, and he’s bringing in $10,000 a month!

You may remember when a new website Ship Your Enemies Glitter drew the attention of media worldwide some time ago, by allowing revenge-seekers to mail an envelope of glitter to their enemies.

Such was the success of the company, they eventually sold for $85,000 when the demand became too much to handle and unleashed a wave of copycat businesses on the world hoping to cash in on their success.

24-year-old Texan Craig, however, decided to mash up the postal revenge idea with something new—instead of glitter, revenge recipients would unearth a personalized potato amidst their bills and junk mail.

Yes, the humble potato, the staple of the Irish diet, has become the newest way to tell a rival exactly how you feel.

“What’s really cool about this is that it takes me about 30 seconds to write on a potato,” Craig said of his new website, PotatoParcel.com.

Craig has quickly reaped the rewards of his “stupid” idea, earning $10,00 a month. He believes it’s turned into something more than profit, however. “It’s had an impact on somebody’s life even for a split second,” he said

“Suddenly, somebody from Dallas, Texas can have that impact on somebody’s life.”

Such is the success of the site, Craig is now branching out to international orders to Australia, Canada and the UK and offering the opportunity for you to become a PotatoParcel Ambassador in any other country in the world.

Not only is the service being use to seek revenge, people all over the US are using potatoes to send all kinds of messages to their friends and family.

This brings a whole other meaning to the term “hot potato”! Have a look at some of the messages sent so far, below.

Guess what Max got me for my Birthday #potatoparcel pic.twitter.com/RIZiuyfngy

My sister's big promotion at work earned her this #potatoparcel pic.twitter.com/swti2WdxzZ

Who would you like to send a revenge/prank potato to and why? Leave your enemy list in the comments section below.