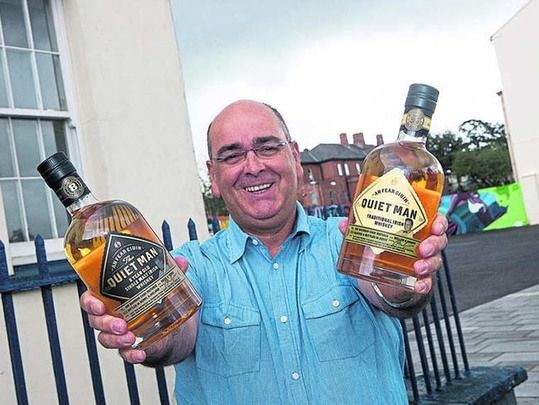 A man with a background in cream liqueur production is expanding his company to include whiskey, in memoriam of his own barman father. The Quiet Man Craft Irish Whiskey Distillery will be the first new-build distillery in the city for over 150 years.

Niche Drinks, managed by Ciaran Mulgrew, is set to launch an eight-year-old single malt and a blended whiskey. Mulgrew said the launch will be a personal and business milestone.

“My father, John Mulgrew, was a barman who worked for over 50 years in various bars around Belfast and Cookstown, Co Tyrone,” he told the Belfast Telegraph.

"From a very young age he would bring me into work with him and I grew up loving the sounds and smells of the bar, the craic, the laughter, and the smell of the whiskey.

"I always thought that if I ever got to make my own whiskey I would name it after my father. In 50 years as a barman he saw a lot of things and heard a lot of stories, but like all good bartenders, he was true to his code and told no tales. He was 'The Quiet Man' or as they say in the Irish 'An Fear Ciuin.'"

The new whiskey features an image of John Mulgrew, from the 1950s, when he worked in Kelly's Cellars in Belfast, on the label.

Mulgrew told the Irish News, “It is a very emotional thing for me to see the whiskey beginning to appear on local shelves as well further afield in Canada, the US, Germany, South Africa.”

Niche Drinks, known for manufacturing and exporting St Brendan's Irish Cream liqueurs, which are exported to the US, Scandinavia, Russia and throughout Europe, has been based in Derry for about 30 years.

Mulgrew said, "From London, England to London, Ontario and many places in between, we have been selling cream liqueurs manufactured in Northern Ireland for over three decades, but we have tended to do it quietly and without much fuss.

"For a long time now the company has wanted to get into the Irish whiskey business and for me personally it has been much longer held ambition.”

They have now secured planning permission for their own distillery and visitor center in Derry.