From ancient burial grounds to great battles and heroes to everyday modern Ireland - a walk through the history of the Boyne Valley.

From ancient burial grounds to great battles and heroes to everyday modern Ireland - a walk through the history of the Boyne Valley.

If he could talk, my dog Jack could boast that he has something in common with, among others, St. Patrick, Kings Billy and James, Oliver Cromwell, and Mel Gibson - they have all had adventures of one kind or other in the valley of the River Boyne.

Thankfully Jack hasn’t yet developed the power of speech, but I swear he understands much more than he lets on. He often has a knowing expression on his face when I talk to him. Or it might be pity.

What started out five years ago as a Sunday afternoon stroll with Jack has turned into a journey through time as I rediscover and photograph this very special place.

What's so special about the Boyne Valley?

Well, there’s the Hill of Tara, the mythical capital of Ireland where the High Kings of Ireland held court thousands of years ago. There was a battle here during the United Irishmen’s rebellion of 1798 and in 1843 ‘The Liberator,’ Daniel O’Connell, spoke to a gathering said to be a million strong.

The Hill of Slane

The High Kings of post-Celtic Tiger Ireland, despite the huge public outcry and worldwide criticism, forced a motorway through the valley. Nobody seems to know why but, weirdly, this is one election promise they honored.

At the Hill of Slane, in 433 AD, St. Patrick lit the Pascal fire as a beacon to Christianity. The light of that fire guided thousands of Irish men and women to some of the remotest regions of the world. That light has been dimmed by scandals in the Catholic Church but is not out yet.

Brú na Bóinne (the Irish for Boyne Valley) is a UNESCO World Heritage Site featuring the archaeological remains of a sophisticated society that inhabited a large site on a bend in the river about five thousand years ago. 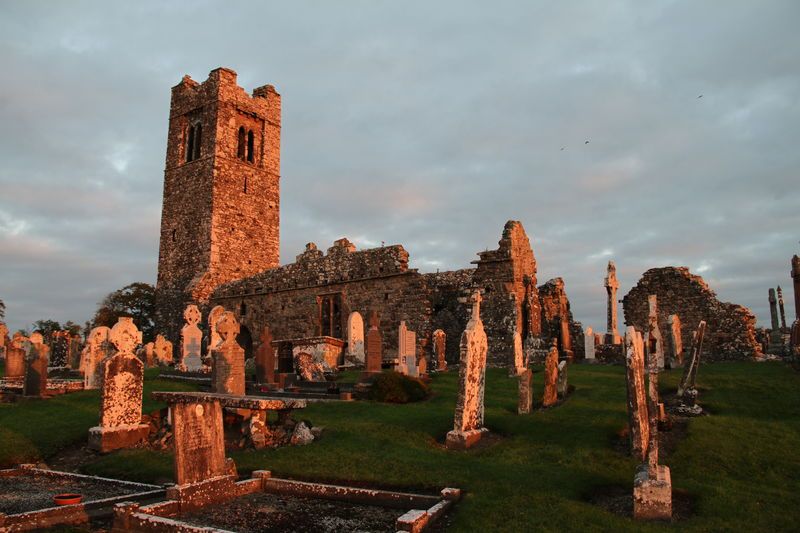 This is one of Ireland's major archaeological landscapes and it pre-dates the pyramids by hundreds of years.   The most dramatic and famous are the burial chambers of Newgrange, Knowth, and Dowth, but there are a total of 93 sites and monuments recorded to date and who knows how many more secrets are yet to be revealed?

Jack cocked his leg against the famous carved entrance stone. He’s got no respect that dog.

A lot of people, me included, find Brú na Bóinne to be a little bit busy and commercial, but just an hour or so away by car is the real thing. The Loughcrew passage graves and cairns are spread over several hilltops just outside Oldcastle in Co. Meath.

There are no coach tours, no guides, no interpretive centers, no gift shops nor coffee bars here. You can’t buy postcards or calendars, but what you will get, without any charge, is the experience of a lifetime.

This has to be one of the most amazing landscapes on earth.  From the top of this hill, you can see as far as the horizon for 360 degrees. If you sit still long enough and really look you get the feeling that time and distance merge.

Everyone should, at least once in their life, make a point of spending some time just sitting or meditating at the main cairn at Loughcrew.  It is a uniquely magical and mysterious landscape, a place where you feel you really can connect to something bigger than yourself.  It is a place where, if you are patient, you feel you may achieve wisdom. It is a truly magical place that has had a profound effect on visitors since it was constructed almost 6,000 years ago.

By comparison, the Boyne canal which was built during the mid to late 18th century is a relative newcomer to the scene. Extending for some 19 miles between Drogheda and Navan it was designed as a means of connecting the mills and factories of Navan to the port of Drogheda, but it was pretty quickly overtaken by the introduction of the steam train and was never a commercial success.

Today all that remains are several beautifully constructed bridges and locks and sections of the towpath which make good walking routes at all times of the year. In recent years volunteers from the Inland Waterways Association have been carrying out some restoration work with the long-term aim of reopening the waterway. They deserve more official assistance than they are currently getting. 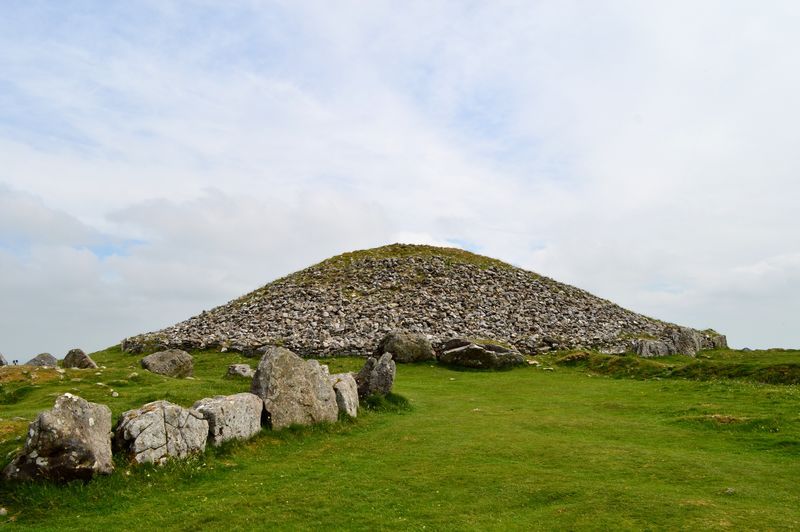 The Battle of the Boyne

The Battle of the Boyne took place in July 1690, just downstream from Newgrange at Oldbridge. King William of Orange, or King Billy as he will always be known, squared up to his father-in-law King James II in a battle that changed the course of Irish and European history.  More than 2,000 soldiers died and a thousand stories, myths, and legends were born.

Today the sound of cannon fire still echoes around the valley, but they're firing blanks for the delight of visitors to the Battle of the Boyne interpretive center at Oldbridge House.

Deep in the Royal County, Trim Castle is an example of what a castle should look like. Mel Gibson and the makers of the film "Braveheart" certainly thought so because they chose it as the location for some of the gorier scenes of that film.

Dating from the end of the 12th Century, King John’s Castle is the biggest Norman castle in Ireland.  Most of its 500-meter (1,600') perimeter wall still stands and there is a fine drawbridge through which you can easily imagine mounted soldiers rushing en route to some blood-curdling exploit.

Jack left his calling card at this front door too.

The town of Drogheda has a rich and varied history. It was a functioning port when Dublin was still a swamp. Atrocities carried out here by Oliver Cromwell in 1649 are neither forgotten nor forgiven by the citizens. 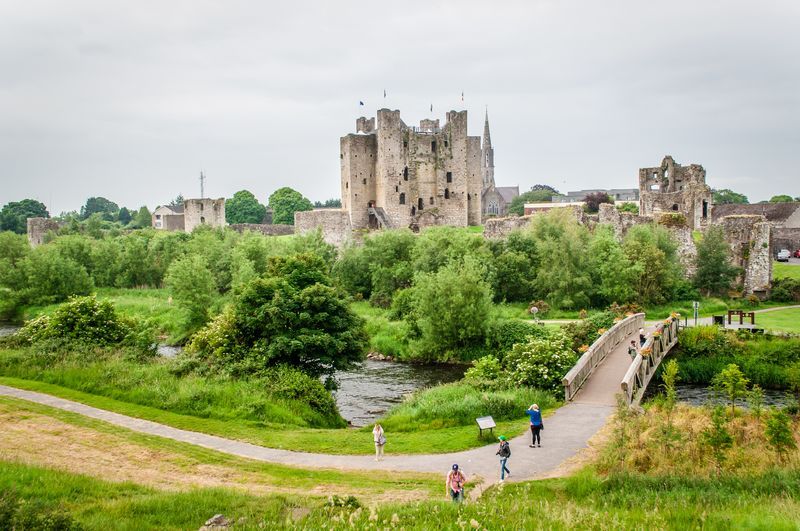 Born in 1625 in Loughcrew, County Meath, Oliver Plunkett was ordained a priest in 1654 and appointed Archbishop of Armagh and Primate of Ireland in 1669. He was very popular with the faithful of Drogheda and indeed he still is.

He was not so popular with the English government of the day, however, because he flouted their penal laws, which were designed to wipe out Catholicism. They arrested him on trumped-up charges and he was hung, drawn and quartered at Tyburn. His severed head is these days on view in St. Peter’s Church in Drogheda.  He was made a saint in 1975.

The Irish name for Drogheda is Droichead Átha which means "the ford by the bridge". My favorite bridge is the Boyne Viaduct. Designed by the Scottish Engineer Sir John McNeill and completed in 1855, it carries the Dublin to Belfast railway.

The best views of Drogheda are to be seen from Millmount, which is a fort on a hill to the south and is the perfect site for a military installation as it dominates the town. Its origins are something of a mystery, but in the 12th century, the Normans fortified what may have been an earlier passage grave.

In the early 19th century the British demolished the Norman fort and built the “Cup and Saucer” or Martello fort that sits on the hill today. It was seriously damaged by Free State shelling in 1922 during the Irish Civil War but has since been restored. The barrack buildings now house a museum and craft center.

The 700-year-old Laurence’s Gate was once one of the main entrances to the walled town and people had to pay a toll to enter.  It is a beautiful structure, but sadly the powers-that-be allow traffic through it. It is terrible to see our built heritage being treated with such disdain.

For years Drogheda was a perpetual traffic jam as all traffic on the Dublin to Belfast road had to wind through the narrow streets of the medieval town. In the seventies, the men from the ministry built what is perhaps the only bypass in the history of road-making that actually split a town in two.

By the time they were finished half the population of Drogheda had to risk life and limb to get to the shops. Sadly, quite a few did not make it across. More recent practitioners of the road builder’s art have built a motorway further out but, perhaps learning from the builders of Laurence’s gate, they put a toll on it which means that once again visitors and citizens alike must pay to enter.

Perhaps someday you will come and explore for yourself. Please, though, take your time and look out for Jack, he’s no good at traffic management either.