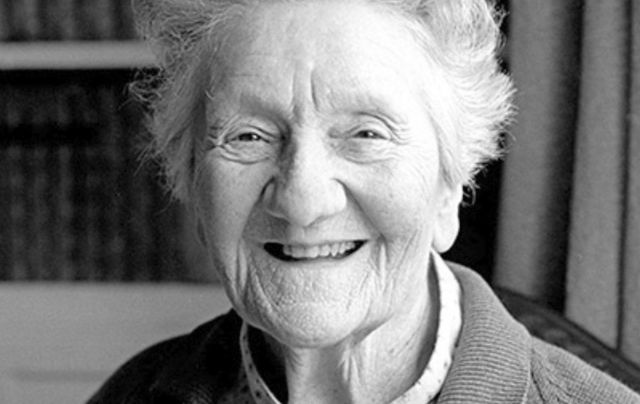 Editor's note: Over the ten years of IrishCentral.com we’ve always been heartened, come the start of spring, that our passionately Irish-loving audience from around the world has a profound interest in St. Brigid, the oft-forgotten female patron Saint of Ireland and formerly the Pagan goddess linked to the Celtic holiday of Imbolc.

In the age of #MeToo and Time’s Up it seemed only right that IrishCentral team up with Herstory in the run-up to St. Brigid Day and celebrate strong Irish women from history, some of whom you may never have heard of.

Here is a short biography of Cynthia Longfield, the entomologist, and world traveler, also knows as “Madam Dragonfly”:

Cynthia Longfield, ‘Madam Dragonfly’, was born in London in 1896 to Anglo-Irish parents. The family divided their time between London and the ancestral home in Cloyne, Co. Cork, where she enjoyed roaming the countryside. Her early love of nature and insects grew into a lifelong passion, and she became a leading authority on dragonflies and damselflies.

Longfield’s interest in the sciences was fostered in childhood, with her mother’s encouragement. She was inspired at an early age by reading about Charles Darwin’s theory of evolution and his Beagle voyage of 1831–6. She later wrote, ‘I went on the St George expedition to follow Darwin’s footsteps – and I got there!’ She absorbed the importance of fieldwork and travel, both of which played important roles in her life and in her scientific work.

It was in 1921, during her first overseas tour – taking in Brazil, Argentina, Chile, Bolivia, Peru, Panama, Jamaica, and Cuba – that her passion for entomology blossomed. In 1924, she participated in the St George scientific expedition, an 18-month-long re-enactment of Darwin’s Beagle voyage, taking in Coiba, Cocos Island, the Galapogos, the Marquesas, the Tuamotu Archipelago, and Tahiti. During the expedition, Longfield collected moths, beetles, and butterflies for the Natural History Museum in London.

Following this, she worked, unpaid, as a cataloguer at the museum, where she had responsibility for the dragonfly collection. Her personal circumstances freed her from the need for paid employment. She would remain in this post for 30 years but continued to travel the world in search of specimens.

In 1927, she participated in a six-month-long scientific expedition in the Mato Grosso, Brazil, where she collected 38 species of dragonfly, three of which were new species. She went on to make scientific expeditions to south-east Asia in 1929, where she collected hundreds of moths and butterflies; to Kenya, Uganda, Zimbabwe (then Rhodesia) and South Africa in 1934, where she traveled alone and identified six new species of butterfly and dragonfly; and to Cape Town and Zimbabwe in 1937. She forced to return to London when she contracted malaria in 1937 and was prevented from returning to Africa by the outbreak of World War II.

During the war, she volunteered for the Auxiliary Fire Service in London. She had previously worked with the Royal Army Service Corps and in an airplane factory during World War I.

Longfield did not limit herself to quietly cataloging species in the museum. She regularly published her findings, sat on museum committees, and was a member of the Entomological Society, the Royal Geographical Society, and the London Natural History Society. In 1937, she published the sell-out The Dragonflies of the British Isles, which became the standard handbook on the topic.

She retired from London’s Natural History Museum in 1956 and returned to Cloyne, but never stopped traveling or studying entomology. Two dragonfly species were named in her honor: Corphaeschna longfieldae (Brazil) and Agrionopter insignis cynthiae (Tanimbar Islands). She donated her personal archive and library, some 500 volumes, to the Royal Irish Academy in 1979, and her Irish specimen collection to the Natural History Museum in Dublin.