Far-right commentator John McGuirk appeared on an episode of Prime Time in early March and falsely accused a radical republican political party of being responsible for the murder a journalist. 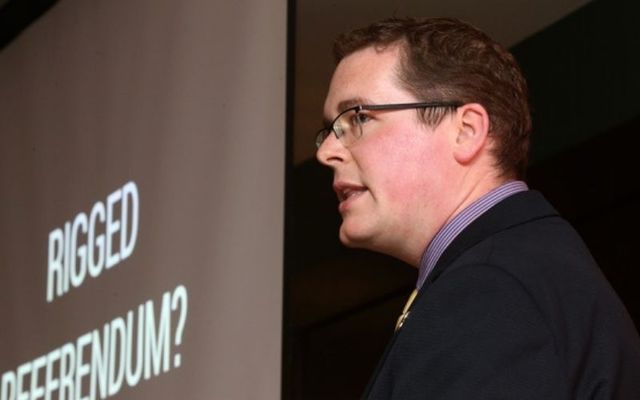 John McGuirk advocated for a "No" vote during the 2018 referendum on abortion. Rolling News

RTÉ has paid €20,000 to charity after a radical republican political group was falsely accused of murder during an episode of "Prime Time" at the beginning of March.

Right-wing commentator John McGuirk appeared on an episode of "Prime Time" on March 2 and incorrectly claimed that radical republican political party Éirígí was responsible for the murder of a journalist - an apparent reference to the murder of Lyra McKee in Derry in 2019. McGuirk also claimed that Éirígí endorsed terrorism during the episode.

McGuirk also admitted to his mistake in a tweet shortly after the March 2 episode of Prime Time, saying that he "got my republican groups mixed up badly".

The republican group Saoradh has been linked to the murder of McKee in the past.

RTÉ has now reached a settlement with Éirígí, which involved RTÉ broadcasting the second apology by Louise Byrne.

The settlement also includes the permanent removal of the defamatory comments made by McGuirk from the RTÉ Player, while RTÉ's full apology will also be uploaded to the RTÉ Player.

RTÉ will also pay €5,000 to Inner City Helping Homeless, €5,000 to Capuchin Day Centre, and €10,000 towards a journalism bursary fund in the name of murdered journalist Lyra McKee as part of the settlement. Éirígí nominated all three donations.

Brian Leeson, Cathaoirleach of Éirígí, said in a statement that the republican political party did not seek to gain financially from the incident.

"For Éirígí, this was always a matter of principle. We did not set out to gain financial advantage individually or collectively from this situation," Leeson said in a statement.

"But we did feel that it was appropriate for RTÉ to pay a financial price for the wrong that was done to the party and to our individual members."
He said they felt that was best done by securing "significant donations" from RTÉ for a number of charities.

"RTE have an obligation to ensure that Prime Time, arguably the most important current affairs program in the country, is not used as a platform for the far-right to make false statements or spread disinformation.

Meanwhile, an RTÉ spokesperson said: "We corrected that statement on the night and have been asked by Éirígí to clarify that it is an open, registered political party that has never been involved in shooting a journalist and does not support violence. We are happy to do so and apologise sincerely for what was said."

Éirígí was formed in 2006 by a group of Dublin-based political activists and describes itself as a radical socialist republican party.

John McGuirk, on the other hand, is the editor of far-right publication Gript and advocated for a "no" vote in recent referenda on abortion and the Lisbon Treaty.