Charles Byrne stood at 8ft 4in and achieved celebrity status in London due to his height. 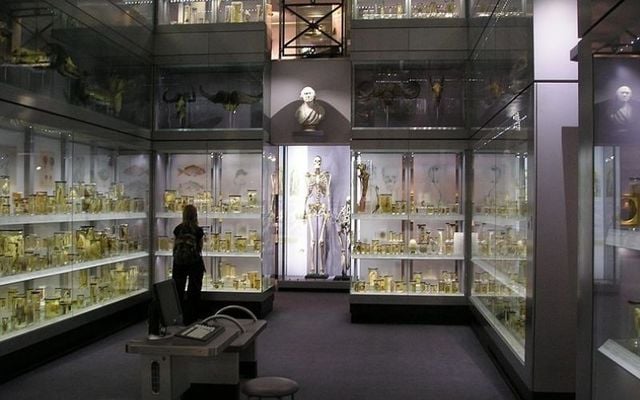 Charles Byrne at the Hunterian Museum at the Royal College of Surgeons in London. StoneColdCrazy at English Wikipedia/ Wikimedia Commons

A prominent English author is calling on the Royal College of Surgeons in London to release the skeleton of Charles Byrne, an 18th-century "Irish Giant", and allow it to be buried respectfully.

Dame Hilary Mantel is urging the Hunterian Museum at the Royal College of Surgeons to repatriate the remains of Byrne, an 8ft 4in Irishman who suffered from acromegalic gigantism and became a celebrity in Britain due to his height.

Mantel has previously written a fictionalized account about Byrne's life in "The Giant, O'Brien" and she now wants to secure a proper burial for the Irish Giant, who had asked to be buried at sea before he died.

Byrne, who was born in Derry in 1761, realized that his skeleton may be put on display after his death and went to great lengths to prevent that from happening.

When Byrne died in 1783 at the age of just 22, he had made plans to have his body sealed in a lead coffin and then buried at sea, but his plans were thwarted by John Hunter; a Scottish surgeon and anatomist with a penchant for collecting unusual specimens.

Hunter had made an offer to buy Byrne's remains before he died, prompting Byrne to make the excessive plans to protect his corpse.

Hunter, however, was not to be denied. He arranged for Byrne's body to be snatched while it was being taken to Margate on the southeast coast of England en route to a sea burial. The Scottish surgeon then reduced the corpse to a skeleton and put it on display in the Hunterian Museum at the Royal College of Surgeons four years later.

Byrne's skeleton remained on public display at the museum for around 200 years and now lies in storage as the museum undergoes refurbishment.

Now, Dame Hilary Mantel wants the museum to release the skeleton and bring it back to Ireland. She believes that the body will be buried in Ireland, rather than at sea.

"It's time Charles went home," Mantel wrote in the Guardian. "I know that in real life he was a suffering soul, nothing like the fabulous storybook giant I created, and his gratifications were fewer and his end very grim.

"I think that science has learned all it can from the bones, and the honorable thing now is to lay him to rest. It would suit the spirit of the times, and I don't see a reason for delay. He's waited long enough," she continued.

She said that she believed his desire to be buried at sea was just an attempt to evade Hunter's clutches and she thinks that he would be buried in Ireland if the museum released his bones.

A number of academics have previously called for Byrne's skeleton to be buried at sea.

Len Doyal, Emeritus Professor of Medical Ethics at the Queen Mary University of London, and Thomas Muinze, a law lecturer at the same university, wrote in the British Medical Journal calling for Byrne to be buried at sea.

Meanwhile, Dr. Cliona McGovern, head of forensic and legal medicine at UCD in Ireland, echoed the calls of Muinze and Doyal and said that Hunter interfered with Byrne's burial right.

The Hunterian Museum announced two years ago that it was considering sending Byrne's body back to Ireland for a sea burial as soon as construction was finished at the museum, but the refurbishment has been pushed back until 2022 and the museum remains closed.